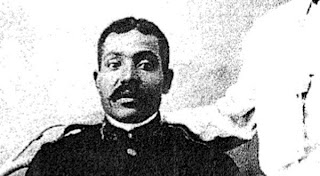 By Richard Simon
WASHINGTON -- One-hundred-and-thirteen years after John J. Pershing recommended him for promotion, Sgt. Paschal Conley, a Buffalo Soldier, would posthumously be elevated to second lieutenant under a Senate-approved defense bill.

Sen. Jeff Sessions (R-Ala.) sought the few lines in the massive bill at the behest of Conley's descendants.

Conley was a member of the group of African American Army regiments, serving from 1879 until 1906 and fighting in the Spanish-American War, according to the Alabama Department of Veterans Affairs, which sought Sessions' help after the department's commissioner, W. Clyde Marsh, was contacted by the Conley family.

Then-1st Lt. Pershing, in an 1899 letter provided by Sessions' office, recommended Conley for promotion, calling it "a fitting recognition of long and honorable service."
But the recommendation was never acted on.

Sessions asked the Army about "righting this wrong" and posthumously upgrading Conley's rank, according to a spokesman for the senator. He was advised that legislation was required.

Marsh said of Conley, "As a pioneer in the legendary Buffalo Soldiers 10th Cavalry, he was a unique role model and a sage leader. In fact, it appears he was ahead of his time as he came up through the ranks, apparently excelling, ultimately earning a field recommendation for promotion from noncommissioned officer to commissioned officer when there were no established routes for men of his race and ethnicity at that point in time."

And of Pershing, Marsh added, "If he recommended Sgt. Conley for a promotion, I am confident that it was well earned and warranted. It would appear that the proper paperwork was submitted but did not get through the system and processed. It is also apparent to me that we, the United States and our U.S. Army, have the ability to correct this mistake, which would be the right thing to do."

Congress has acted before to posthumously recognize long-deceased veterans. A provision of last year's defense authorization directs the Defense Department to determine whether Jewish recipients of the Distinguished Service Cross, Navy Cross or other military decorations for service during World War I should posthumously receive the Medal of Honor. It was added to the bill at the urging of an octogenarian daughter of a Jewish World War I veteran.

Prospects for this year's defense bill are uncertain. The measure passed the Senate, 98-0, but must be reconciled with a House version with time running out in the congressional session. The Senate version also has drawn a presidential veto threat because of a number of its provisions.