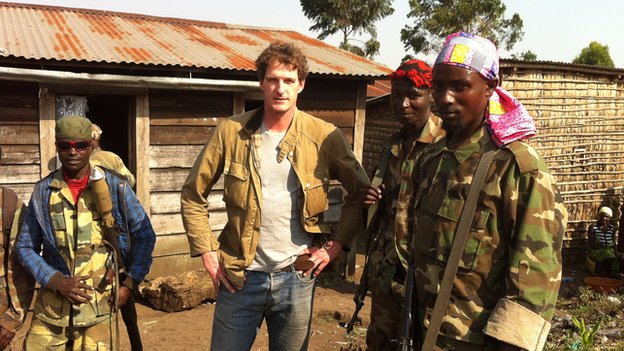 The Democratic Republic of Congo is potentially one of the richest countries on earth, but colonialism, slavery and corruption have turned it into one of the poorest, writes historian Dan Snow.
The world's bloodiest conflict since World War II is still rumbling on today.
It is a war in which more than five million people have died, millions more have been driven to the brink by starvation and disease and several million women and girls have been raped.
The Great War of Africa, a conflagration that has sucked in soldiers and civilians from nine nations and countless armed rebel groups, has been fought almost entirely inside the borders of one unfortunate country - the Democratic Republic of Congo. 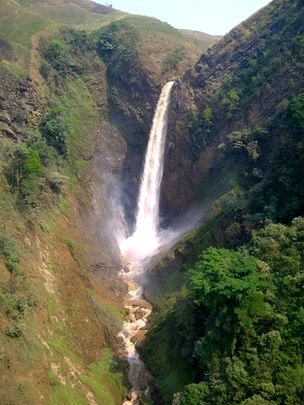 Many of the country's mining operations are connected to the waters of the mighty Congo River
It is a place seemingly blessed with every type of mineral, yet consistently rated lowest on the UN Human Development Index, where even the more fortunate live in grinding poverty.
I went to the Congo this summer to find out what it was about the country's past that had delivered it into the hands of unimaginable violence and anarchy.

The journey that I went on, through the Congo's abusive history, while travelling across its war-torn present, was the most disturbing experience of my career.
I met rape victims, rebels, bloated politicians and haunted citizens of a country that has ceased to function - people who struggle to survive in a place cursed by a past that defies description, a history that will not release them from its death-like grip.
The Congo's apocalyptic present is a direct product of decisions and actions taken over the past five centuries.
In the late 15th Century an empire known as the Kingdom of Kongo dominated the western portion of the Congo, and bits of other modern states such as Angola.
It was sophisticated, had its own aristocracy and an impressive civil service.
When Portuguese traders arrived from Europe in the 1480s, they realised they had stumbled upon a land of vast natural wealth, rich in resources - particularly human flesh.
The Congo was home to a seemingly inexhaustible supply of strong, disease-resistant slaves. The Portuguese quickly found this supply would be easier to tap if the interior of the continent was in a state of anarchy.
They did their utmost to destroy any indigenous political force capable of curtailing their slaving or trading interests.
Money and modern weapons were sent to rebels, Kongolese armies were defeated, kings were murdered, elites slaughtered and secession was encouraged.

By the 1600s, the once-mighty kingdom had disintegrated into a leaderless, anarchy of mini-states locked in endemic civil war. Slaves, victims of this fighting, flowed to the coast and were carried to the Americas.
About four million people were forcibly embarked at the mouth of the Congo River. English ships were at the heart of the trade. British cities and merchants grew rich on the back of Congolese resources they would never see.
This first engagement with Europeans set the tone for the rest of the Congo's history.
Development has been stifled, government has been weak and the rule of law non-existent. This was not through any innate fault of the Congolese, but because it has been in the interests of the powerful to destroy, suppress and prevent any strong, stable, legitimate government. That would interfere - as the Kongolese had threatened to interfere before - with the easy extraction of the nation's resources. The Congo has been utterly cursed by its natural wealth.
The Congo is a massive country, the size of Western Europe. 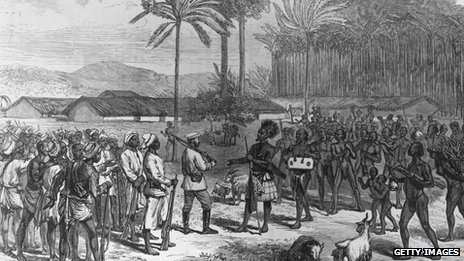 Stanley's expeditions opened up the Congo for exploitation by King Leopold
Limitless water, from the world's second-largest river, the Congo, a benign climate and rich soil make it fertile, beneath the soil abundant deposits of copper, gold, diamonds, cobalt, uranium, coltan and oil are just some of the minerals that should make it one of the world's richest countries.
Instead it is the world's most hopeless.
The interior of the Congo was opened up in the late 19th Century by the British-born explorer Henry Morton Stanley, his dreams of free trading associations with communities he met were shattered by the infamous King of the Belgians, Leopold, who hacked out a vast private empire. 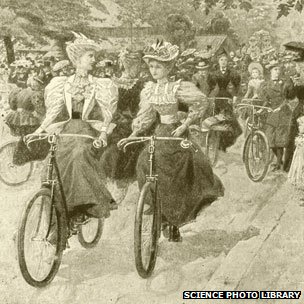 Congo rubber was in high demand after the pneumatic tyre appeared on the market in 1888
The world's largest supply of rubber was found at a time when bicycle and automobile tyres, and electrical insulation, had made it a vital commodity in the West.

The late Victorian bicycle craze was enabled by Congolese rubber collected by slave labourers.
To tap it, Congolese men were rounded up by a brutal Belgian-officered security force, their wives were interned to ensure compliance and were brutalised during their captivity. The men were then forced to go into the jungle and harvest the rubber.
Disobedience or resistance was met by immediate punishment - flogging, severing of hands, and death. Millions perished.
Tribal leaders capable of resisting were murdered, indigenous society decimated, proper education denied.
A culture of rapacious, barbaric rule by a Belgian elite who had absolutely no interest in developing the country or population was created, and it has endured.
In a move supposed to end the brutality, Belgium eventually annexed the Congo outright, but the problems in its former colony remained.
Mining boomed, workers suffered in appalling conditions, producing the materials that fired industrial production in Europe and America. 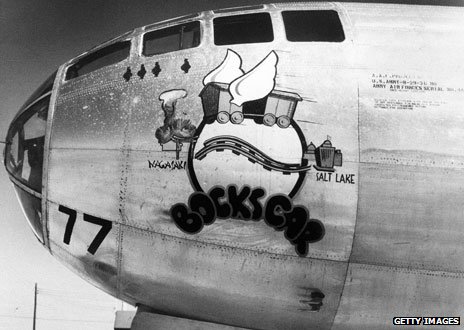 Uranium used to construct the atomic bomb was sourced from Congo
In World War I men on the Western Front and elsewhere did the dying, but it was Congo's minerals that did the killing.
The brass casings of allied shells fired at Passchendaele and the Somme were 75% Congolese copper.
In World War II, the uranium for the nuclear bombs dropped on Hiroshima and Nagasaki came from a mine in south-east Congo.
Western freedoms were defended with Congo's resources while black Congolese were denied the right to vote, or form unions and political associations. They were denied anything beyond the most basic of educations.
They were kept at an infantile level of development that suited the rulers and mine owners but made sure that when independence came there was no home-grown elite who could run the country.
Independence in 1960 was, therefore, predictably disastrous.
Bits of the vast country immediately attempted to break away, the army mutinied against its Belgian officers and within weeks the Belgian elite who ran the state evacuated leaving nobody with the skills to run the government or economy. 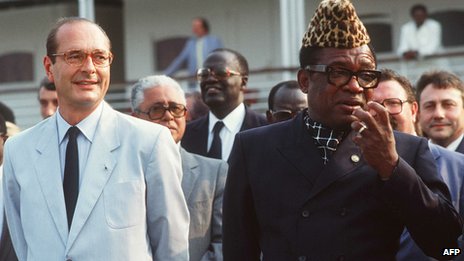 Mobutu, pictured with Jacques Chirac, was courted by the West for decades
Of 5,000 government jobs pre-independence, just three were held by Congolese and there was not a single Congolese lawyer, doctor, economist or engineer.
Chaos threatened to engulf the region. The Cold War superpowers moved to prevent the other gaining the upper hand.
Sucked into these rivalries, the struggling Congolese leader, Patrice Lumumba, was horrifically beaten and executed by Western-backed rebels. A military strongman, Joseph-Desire Mobutu, who had a few years before been a sergeant in the colonial police force, took over.
Mobutu became a tyrant. In 1972 he changed his name to Mobutu Sese Seko Nkuku Ngbendu Wa Za Banga, meaning "the all-powerful warrior who, because of his endurance and inflexible will to win, goes from conquest to conquest, leaving fire in his wake".
The West tolerated him as long as the minerals flowed and the Congo was kept out of the Soviet orbit.
He, his family and friends bled the country of billions of dollars, a $100m palace was built in the most remote jungle at Gbadolite, an ultra-long airstrip next to it was designed to take Concorde, which was duly chartered for shopping trips to Paris. 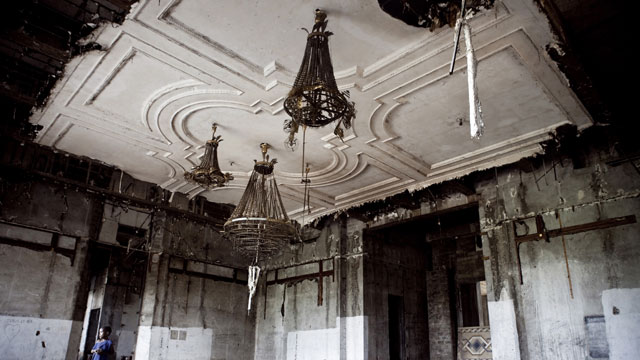 Dan Snow tours Mobutu's former lavish residence at Gbadolite
Dissidents were tortured or bought off, ministers stole entire budgets, government atrophied. The West allowed his regime to borrow billions, which was then stolen and today's Congo is still expected to pay the bill.
In 1997 an alliance of neighbouring African states, led by Rwanda - which was furious Mobutu's Congo was sheltering many of those responsible for the 1994 genocide - invaded, after deciding to get rid of Mobutu.
A Congolese exile, Laurent Kabila, was dredged up in East Africa to act as a figurehead. Mobutu's cash-starved army imploded, its leaders, incompetent cronies of the president, abandoning their men in a mad dash to escape.
Mobutu took off one last time from his jungle Versailles, his aircraft packed with valuables, his own unpaid soldiers firing at the plane as it lumbered into the air.
Continue reading the main story

The country has collapsed, roads no longer link the main cities, healthcare depends on aid and charity”

Rwanda had effectively conquered its titanic neighbour with spectacular ease. Once installed however, Kabila, Rwanda's puppet, refused to do as he was told.
Again Rwanda invaded, but this time they were just halted by her erstwhile African allies who now turned on each other and plunged Congo into a terrible war.
Foreign armies clashed deep inside the Congo as the paper-thin state collapsed totally and anarchy spread.
Hundreds of armed groups carried out atrocities, millions died.
Ethnic and linguistic differences fanned the ferocity of the violence, while control of Congo's stunning natural wealth added a terrible urgency to the fighting.
Forcibly conscripted child soldiers corralled armies of slaves to dig for minerals such as coltan, a key component in mobile phones, the latest obsession in the developed world, while annihilating enemy communities, raping women and driving survivors into the jungle to die of starvation and disease. 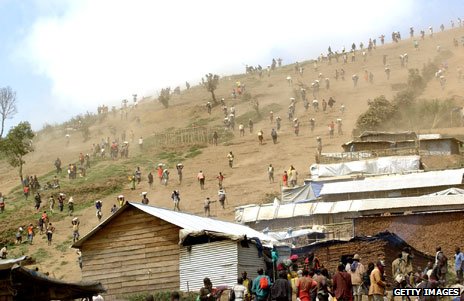 Bags of coltan, used in mobile phones, and manganese are carried at a mine
A deeply flawed, partial peace was patched together a decade ago. In the far east of the Congo, there is once again a shooting war as a complex web of domestic and international rivalries see rebel groups clash with the army and the UN, while tiny community militias add to the general instability.
The country has collapsed, roads no longer link the main cities, healthcare depends on aid and charity. The new regime is as grasping as its predecessors.
I rode on one of the trainloads of copper that go straight from foreign-owned mines to the border, and on to the Far East, rumbling past shanty towns of displaced, poverty-stricken Congolese.
The Portuguese, Belgians, Mobutu and the present government have all deliberately stifled the development of a strong state, army, judiciary and education system, because it interferes with their primary focus, making money from what lies under the Earth.
The billions of pounds those minerals have generated have brought nothing but misery and death to the very people who live on top of them, while enriching a microscopic elite in the Congo and their foreign backers, and underpinning our technological revolution in the developed world.
The Congo is a land far away, yet our histories are so closely linked. We have thrived from a lopsided relationship, yet we are utterly blind to it. The price of that myopia has been human suffering on an unimaginable scale.