May 19th is National Hepatitis Testing Day in the United States to emphasize the importance of testing persons at risk for hepatitis B virus (HBV) and hepatitis C virus (HCV) infections, most of whom are unaware of their infection status. Recognizing the effectiveness of testing and other preventive and treatment measures, the National Academies of Science, Engineering, and Medicine recently set goals for the elimination of HBV and HCV as public health threats in the United States.*

HCV is the most common form of viral hepatitis in the United States and in 2013, accounted for approximately 19,000 deaths per year, a number that was greater than that of 60 other nationally notifiable infectious diseases combined (1). During 2010–2015, HCV incidence increased by 294% with the highest rates among young persons who inject drugs (PWID).†

This issue of MMWR includes two reports describing trends in HCV incidence and the availability of HCV prevention and treatment services that stop transmission. In the first report, only three states had comprehensive laws providing full access to HCV preventive and treatment services for PWID. The second report estimates rates of HCV infection among pregnant women in the United States and Tennessee; in the United States, HCV rates nearly doubled during 2009–2014, and in Tennessee, the rate in 2014 was approximately three times the national rate. Data from both reports emphasize the importance of viral hepatitis surveillance to identify communities at risk for HCV and public health policies that make available interventions that prevent HCV transmission and disease.

May 2017. Urban disasters highlight need for resilience in Africa 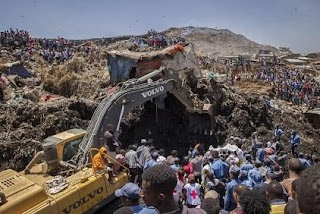 Rescuers work at the scene of the rubbish dump landslide in Addis Ababa (Photo: AP/Mulugeta Ayene)

By Evelyne Karanja
NAIROBI, 10 May 2017 – Rising disasters in Africa’s cities and their links with poverty and rapid, unplanned urbanisation are ever more apparent from tragedies such as the recent rubbish dump landslide in Addis Ababa, which killed at least 113 people.
Tackling urban risk will be a key issue when governments and a broad range of other stakeholders, including businesses and tech experts, meet in two weeks’ time in Mexico for the 2017 Global Platform for Disaster Risk Reduction.
Read more: http://www.unisdr.org/archive/53015


Event registration is by invitation only. Register with your email address to attend this event.


We hope you can make it!

Take up the ‘noble pursuit’ of disaster risk reduction

By Andy McElroy
BEIJING, 12 May 2017 – Young researchers in China have been urged to take up the ‘noble pursuit’ of applying science and technology to save lives and protect livelihoods from disasters.

Robert Glasser, Special Representative of the Secretary-General for Disaster Risk Reduction, calls on students at Beijing Normal University to take up the 'noble pursuit' of disaster risk reduction (Photo: UNISDR)

Faith-based community members get your applications in!

“Our lives are not our own. We are bound to others, past and present, and by each crime and every kindness, we birth our future.” ¯ David Mitchell, Cloud Atlas
Cooperation, Collaboration, Communication, Coordination, Community engagement, and  Partnering (C5&P)             A 501 (c) 3 organization.
- May 13, 2017 No comments: Links to this post