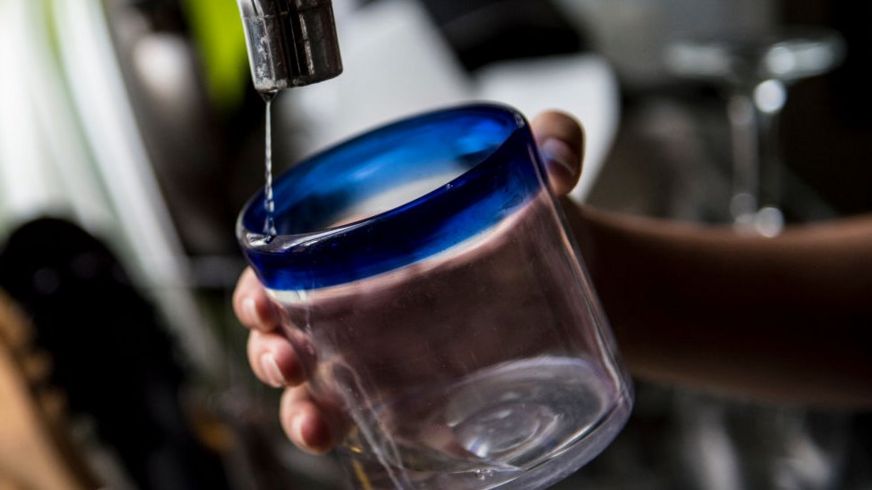 Cape Town is in the unenviable situation of being the first major city in the modern era to face the threat of running out of drinking water.
However, the plight of the drought-hit South African city is just one extreme example of a problem that experts have long been warning about - water scarcity.
Despite covering about 70% of the Earth's surface, water, especially drinking water, is not as plentiful as one might think. Only 3% of it is fresh.
Over one billion people lack access to water and another 2.7 billion find it scarce for at least one month of the year. A 2014 survey of the world's 500 largest cities estimates that one in four are in a situation of "water stress"
According to UN-endorsed projections, global demand for fresh water will exceed supply by 40% in 2030, thanks to a combination of climate change, human action and population growth.

It shouldn't be a surprise, then, that Cape Town is just the tip of the iceberg. Here are the other 11 cities most likely to run out of water.

Brazil's financial capital and one of the 10 most populated cities in the world went through a similar ordeal to Cape Town in 2015, when the main reservoir fell below 4% capacity.
At the height of the crisis, the city of over 21.7 million inhabitants had less than 20 days of water supply and police had to escort water trucks to stop looting.
It is thought a drought that affected south-eastern Brazil between 2014 and 2017 was to blame, but a UN mission to São Paulo was critical of the state authorities "lack of proper planning and investments".
The water crisis was deemed "finished" in 2016, but in January 2017 the main reserves were 15% below expected for the period - putting the city's future water supply once again in doubt.

Local officials in the southern Indian city have been bamboozled by the growth of new property developments following Bangalore's rise as a technological hub and are struggling to manage the city's water and sewage systems.
To make matters worse, the city's antiquated plumbing needs an urgent upheaval; a report by the national government found that the city loses over half of its drinking water to waste.
Like China, India struggles with water pollution and Bangalore is no different: an in-depth inventory of the city's lakes found that 85% had water that could only be used for irrigation and industrial cooling.
Not a single lake had suitable water for drinking or bathing.
Will Cape Town be the first city to run out of water?

The World Bank classifies water scarcity as when people in a determined location receive less than 1,000 cubic metres of fresh water per person a year.
In 2014, each of the more than 20 million inhabitants of Beijing had only 145 cubic metres.
China is home to almost 20% of the world's population but has only 7% of the world's fresh water.
A Columbia University study estimates that the country's reserves declined 13% between 2000 and 2009.
And there's also a pollution problem. Official figures from 2015 showed that 40% of Beijing's surface water was polluted to the point of not being useful even for agriculture or industrial use.
The Chinese authorities have tried to address the problem by creating massive water diversion projects. They have also introduced educational programmes, as well as price hikes for heavy business users.

Once crucial to the establishment of one of the world's greatest civilisations, the River Nile is struggling in modern times.
It is the source of 97% of Egypt's water but also the destination of increasing amounts of untreated agricultural, and residential waste.
World Health Organization figures show that Egypt ranks high among lower middle-income countries in terms of the number of deaths related to water pollution.
The UN estimates critical shortages in the country by 2025.

Like many coastal cities, the Indonesian capital faces the threat of rising sea levels.
But in Jakarta the problem has been made worse by direct human action. Because less than half of the city's 10 million residents have access to piped water, illegal digging of wells is rife. This practice is draining the underground aquifers, almost literally deflating them.
As a consequence, about 40% of Jakarta now lies below sea level, according to World Bank estimates.
To make things worse, aquifers are not being replenished despite heavy rain because the prevalence of concrete and asphalt means that open fields cannot absorb rainfall.

One-quarter of the world's fresh water reserves are in Russia, but the country is plagued by pollution problems caused by the industrial legacy of the Soviet era.
That is specifically worrying for Moscow, where the water supply is 70% dependent on surface water.
Official regulatory bodies admit that 35% to 60% of total drinking water reserves in Russia do not meet sanitary standards

According to official Turkish government figures, the country is technically in a situation of a water stress, since the per capita supply fell below 1,700 cubic metres in 2016.
Local experts have warned that the situation could worsen to water scarcity by 2030.
In recent years, heavily populated areas like Istanbul (14 million inhabitants) have begun to experience shortages in the drier months.
The city's reservoir levels declined to less than 30 percent of capacity at the beginning of 2014.

Water shortages are nothing new for many of the 21 million inhabitants of the Mexican capital.
One in five get just a few hours from their taps a week and another 20% have running water for just part of the day.
The city imports as much as 40% of its water from distant sources but has no large-scale operation for recycling wastewater. Water losses because of problems in the pipe network are also estimated at 40%.

Of all the cities in the world, London is not the first that springs to mind when one thinks of water shortages.
The reality is very different. With an average annual rainfall of about 600mm (less than the Paris average and only about half that of New York), London draws 80% of its water from rivers (the Thames and Lea).
According to the Greater London Authority, the city is pushing close to capacity and is likely to have supply problems by 2025 and "serious shortages" by 2040.
It looks likely that hosepipe bans could become more common in the future.

The Japanese capital enjoys precipitation levels similar to that of Seattle on the US west coast, which has a reputation for rain. Rainfall, however, is concentrated during just four months of the year.
That water needs to be collected, as a drier-than-expected rainy season could lead to a drought. At least 750 private and public buildings in Tokyo have rainwater collection and utilisation systems.
Home to more than 30 million people, Tokyo has a water system that depends 70% on surface water (rivers, lakes, and melted snow).
Recent investment in the pipeline infrastructure aims also to reduce waste by leakage to only 3% in the near future.

The US state of Florida is among the five US states most hit by rain every year. However, there is a crisis brewing in its most famous city, Miami.
An early 20th Century project to drain nearby swamps had an unforeseen result; water from the Atlantic Ocean contaminated the Biscayne Aquifer, the city's main source of fresh water.
Although the problem was detected in the 1930s, seawater still leaks in, especially because the American city has experienced faster rates of sea level rise, with water breaching underground defence barriers installed in recent decades.
Neighbouring cities are already struggling. Hallandale Beach, which is just a few miles north of Miami, had to close six of its eight wells due to saltwater intrusion.

The Plague Cycle: The Unending War Between Humanity and Infectious Disease. January 26, 2021 11am ET

The Plague Cycle: The Unending War Between Humanity and In...