No more business as usual. Americans want faith leaders to stand against racism. Here's how NJ clergy have responded

0:49
1:55
For months, clergy around New Jersey and the nation have been consumed with a pandemic that has emptied their pews and taken countless lives.
But now, on the heels of the George Floyd killing in Minnesota, spiritual leaders of many denominations are striving to eradicate a different type of plague: racism.
They have composed heartfelt prayers, preached about an urgent need for justice and enjoined worshipers to act. Many of them, garbed in clerical collars and skullcaps, have themselves taken to the streets with raised voices and fists to demand the dismantling of racism in America.
The death of Floyd, a 46-year-old Black man who died in May after a police officer held his knee to his neck for more than eight minutes, has highlighted "our country's struggles with racism and equal rights," said Rabbi Chaim Poupko of Congregation Ahavath Torah in Engelwood, who was moved to speak about civil rights in sermons and letters to congregants.

Like a growing chorus of clergy around the nation, Poupko urged his congregants to forge stronger relationships with Black Americans and to make "a concerted effort to understand the challenges they face."

The vast majority of Black Americans believe that political issues such as race relations and criminal justice reform should be discussed in their house of worship. A February 2020 survey by the Pew Research Center found that 62% of Black adults believe that clergy should address political issues, and 23% consider it a priority for them to do so.
In contrast, only 36% of white Americans say it's important for sermons to deal with such topics, and 8% say it's essential.
The poll also found that Black Americans are more likely than white or Hispanic Americans to say they've heard such political topics as race relations or criminal justice reform in sermons.
But that seems to be changing. Many clergy have transformed the Floyd episode into a moment of religious introspection. A broad range of religious leaders and their followers report that they are tackling racial justice from the pulpit.
Bishop James Checchio of the Catholic Diocese of Metuchen, for example, led a period of prayer for 8 minutes and 46 seconds for Floyd, his family and an end to violence and racism at a recent prayer service at the Cathedral of St. Francis Assisi in Metuchen.
Eight minutes, 46 seconds has become a national symbol of police brutality associated with Floyd because it was originally reported that the police officer knelt on his neck for that length of time when he died. Calling racism a "national plague," Checchio urged the faithful to tackle the sin of racism with the same intensity with which they are trying to eradicate COVID-19.

The vast majority of pastors, 94%, believe that the church has a responsibility to denounce racism, and most, 62%, say their church has done so, according to a Barna Church Pulse Poll released in early June. The poll also found that 76% of pastors say the church should support peaceful protests in response to Floyd's death.
In interviews with The Record, a broad cross section of religious leaders around the North Jersey region overwhelmingly agreed.


Many clergy around New Jersey say they aren't just preaching against racism, but taking action and encouraging their followers to do so.
Some religious leaders participated in recent demonstrations. Others are organizing programs to help congregants gain a deeper understanding of the Black experience.
And some sat shiva.
Worshipers at Congregation Beth El in South Orange held a symbolic shiva, a mourning ritual that Jews observe for a deceased relative, to grieve for Floyd and make a statement against police brutality. Participants signed up for time slots to sit in front of the temple.

"We wanted the action to be rooted in ritual, because we believe that standing up to systemic racism is what our tradition demands of us," said Rabbi Jesse Olitzky.

'Start by showing up':Experts explain how to be actively anti-racist and model it for kids
The Jewish Center of Teaneck reached out to the New Hope Baptist Church, an African American congregation in Hackensack with the aim of "deepening our bonds of friendship and comity," said Rabbi Daniel Fridman, spiritual leader of the Orthodox synagogue. "We first met in the wake of the murder of Mr. Floyd to express our support and solidarity with the African American community, and we will be continuing Sunday evening with a discussion regarding the removal of confederate iconography, as symbols of intimidation from America's public spaces."


"It might mean being an active prayer partner or offering your thoughts and experiences on social media, being engaged in challenging dialogue with people in your own social circles, or affiliating with faith alliances and NGO's that have delineated actionable steps to establish an equitable society," said Hubbard, who took part in several BLM marches in New Jersey.

Many clergy point to the scriptures as evidence that obliterating racism is not only social justice, but a religious obligation.
Fighting racism is a religious imperative, according to Rabbi Shmuly Yanklowitz, the founder of Uri L'Tzedek (Jewish Social Justice) a national group dedicated to combating oppression. He recently launched a campaign to mobilize the Orthodox Jewish community and its leaders to combat racism.
"The Torah reminds us to take care of the stranger, the refugees, the vulnerable child and the widow," he said. "It's a central part of the makeup of the Jewish ethical tradition that faiths leads to protecting the vulnerable...."
Yanklowitz, who participated in BLM protests around the country, asserted that it's not enough for clergy to talk about racism in sermons, but they must be proactive in fighting it.
Siddiqi of the Muslim Community of New Jersey in Fords, agreed, adding "we have a religious obligation to stop oppression and must take steps in doing so."
Halimah Elmariah, a congregant at North Hudson Islamic Educational Center in Union City, was moved by her imam's khutba, or sermon, last week in which she learned that Mohammed, the prophet and founder of Islam, encouraged inter-racial and inter-tribal marriage as a mechanism to dismantle racism.
"It was a timely sermon, given the moment we are in now," she said. "The reality is some of the stigma around interracial marriage still exists today. The sermon was a reminder that racism never had a place in Islam."

Using privilege for others

The Floyd incident emboldened the Rev. Grant Mansfield of St. George's Episcopal Church in Maplewood to speak out about the importance of using one's privilege to amplify the voices of the disenfranchised, and care for those who are suffering. The church is diverse racially, and congregants understand that "addressing systemic racism is complex and the work does not begin and end in this moment," said Mansfield, who attended a Black Lives Matter protest in his town
Imam Wahy-ud Deen Shareef of the Masjid Waarith ud Deen in Irvington blogged about the issues of racism and police brutality, and mobilized congregants for a protest in front of Newark City Hall.
Other clergy helped congregants examine the pain endured by people of color. Imam Farhan Siddiqi of the Muslim Community of New Jersey in Fords hosted an online discussion about racism and a 10-week class about understanding the Black American experience. 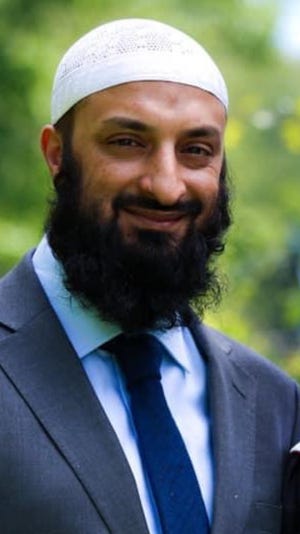 Park United Methodist Church in Bloomfield has long embraced racial equality as part of its mission, but the Rev. Joel Hubbard said there's now an increased urgency to take meaningful action.
When Rabbi Jordan Milstein of Temple Sinai in Tenafly was invited to speak at a BLM protest organized by college students in Demarest, he admitted to the crowd of 400 that as a white Jew, he can't "possibly understand the racism that African Americans have experienced and continue to experience...but as a Jew I know what it means to be a member of a people that has experienced hatred, segregation and violence..." and he vowed that he and others in his community would fight to banish racism.
"It's critical that rabbis from the pulpit — not politicize, but inspire by teaching values," said Rabbi Avi Weiss of the Hebrew Institute of Riverdale, New York and the author of "Spiritual Activism: A Jewish Guide to Leadership and Repairing the World."
Perhaps the most important value in the Torah is tzelem Elokim, he said, "that every human being regardless of race, regardless of nationality, is of infinite and inestimable value, created in the image of God."
Deena Yellin covers religion for NorthJersey.com. For unlimited access to her work covering how the spiritual intersects with our daily lives, please subscribe or activate your digital account today.
Email: yellin@northjersey.com Twitter: @deenayellin