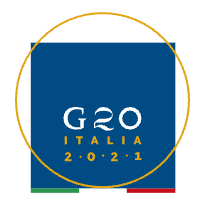 The G20 is the international forum that brings together the world’s major economies. Its members account for more than 80% of world GDP, 75% of global trade and 60% of the population of the planet.
The forum has met every year since 1999 and includes, since 2008, a yearly Summit, with the participation of the respective Heads of State and Government.
In addition to the Summit, ministerial meetings, Sherpa meetings (in charge of carrying out negotiations and building consensus among Leaders), working groups and special events are organized throughout the year.
Visit website for G20:
at October 23, 2021