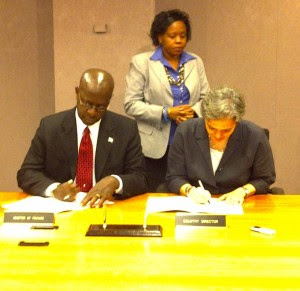 Left to right: Min. Burke & Country Director Clottes
Among key infrastructure rehabilitation projects, the first agreement, the RDVRP the will cover the replacement of two bridges in Gouyave; refurbishment of Holy Cross R.C. School and St. Patrick’s Anglican School, and two homes for the elderly, the Cadrona Home for the Aged and the Hills View Home for the Aged. This is the largest single project ever approved by the World Bank for Grenada and includes a US$8 million grant under a special fund, the PPCR.


The Safety Nets Assistance Programme (SNAP) will ensure that the most vulnerable persons benefit from the Government’s safety net programmes, especially the Public Assistance, the Necessitous Fund and the Transportation Allowance for students.
The ECERA project is aimed at lowering electricity prices and attracting investments in the energy sector, through the establishment of a regional energy regulator to be known as the Eastern Caribbean Energy Regulatory Authority.
The signings took place in Washington DC where the Minister is attending the Annual Meetings of the IMF and World Bank.
Ms. Francoise Clottes, Country Director for the Caribbean signed on behalf of the World Bank.  She noted that because of Grenada’s proactive engagement, Grenada is the first country in the Caribbean to receive a grant under the PPCR pilot project on climate change. The Director praised Grenada’s initiative and persistence in effectively leveraging Bank resources to attract grants.
On signing the agreements, Minister Burke welcomed the increased cooperation between the Government of Grenada and the World Bank Group and expressed the Government’s intention to pursue additional agreements which would contribute further to socio-economic development and poverty reduction.
These three projects presented by Prime Minister Tillman Thomas as part of the Government’s programme of major projects to be implemented over the next 2 years.
The signing ceremony was witnessed by other members of Grenada’s delegation including Mr. Timothy Antoine, Permanent Secretary in the Ministry of Finance, Her Excellency Gillian Bristol, Grenada’s Ambassador to the United States and Mr. Christopher De Riggs, Director, Office of Private Sector Development.
filed in | Embassy News
- September 27, 2011