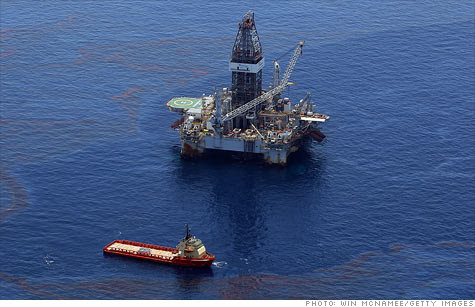 The trial, which is scheduled to take place in Louisiana federal court, is to determine civil liability for the April 2010 oil spill, the worst in U.S. history. Among the defendants are BP (BP), the well operator and majority shareholder in the venture, rig-owner Transocean (RIG), construction contractor Halliburton (HAL, Fortune 500) and other firms associated with the project. Among the thousands of plaintiffs are fishermen, hotel owners and other Gulf Coast residents.

Initially set for Monday, the trial has been postponed until March 5 in order to continue settlement talks, according to a joint statement from BP and the Plaintiff's Steering Committee. Although the parties said there "can be no assurance that these discussions will lead to a settlement agreement."

An order by U.S. District Court Judge Barbier says he issued the delay "to allow the parties to make further progress in their settlement discussions." The Justice Department had no comment on the delay Sunday.
Even with trial proceedings looming, settlement negotiations among the various parties have been proceeding "fast and furious," said Edward Sherman, a professor at Tulane Law School in Louisiana.
BP CEO Bob Dudley told CNN this month that the company was still open to settling the matter out of court, but was "vigorously preparing for the trial." BP has roughly $37 billion set aside for costs associated with the spill following its own settlement with Anadarko Petroleum Co. last year, Dudley added.

In October, Anadarko (APC, Fortune 500) agreed to pay BP $4 billion to settle claims related to the spill. Anadarko owned a 25% stake in the ill-fated well, and as such was responsible for a quarter of all associated costs.
In 2010, BP set up a fund known as the Gulf Coast Claims Facility for which it earmarked $20 billion in settlement money to be distributed to victims of the spill. The GCCF has dealt with over 570,000 claimants thus far, but has paid out just $6 billion, with many victims still holding out for the trial.
Should the case go to trial, the final payouts that BP and the other firms involved will owe in civil penalties and to the victims are still largely an open question. BP could end up paying roughly $17 billion in civil penalties alone, to go along with the tens of billions more that it will likely owe the victims, said Sherman.
"It's a very complex case, because it involves not only so much money but so many parties and so many different legal theories," said Sherman.
Hundreds of pre-trial motions have already been filed, and Judge Carl Barbier has ordered that the case be broken down into three phases.
The first phase will focus on responsibility for the accident itself, while the second will address efforts to contain the spill and the exact quantity of oil released, which plays a role in determining the civil penalties owed by the companies involved. The third phase will address the response to the disaster and the clean-up effort.
How long the case will take to resolve is anybody's guess; Pavel Molchanov, an energy analyst at Raymond James, said the case could stretch into 2014 before any appeals are taken into account.
With the sheer numbers of parties involved, Molchanov said reaching a single, over arching settlement was unlikely. No criminal charges have yet been filed, though that too could change.
"It's going to be a very long process," Molchanov said.