(CNN) - When he was boy growing up in rural Arkansas, James Cone would often stand at his window at night, looking for a sign that his father was still alive.

Cone had reason to worry. He lived in a small, segregated town in the age of Jim Crow. And his father, Charlie Cone, was a marked man.

Charlie Cone wouldn’t answer to any white man who called him “boy.” 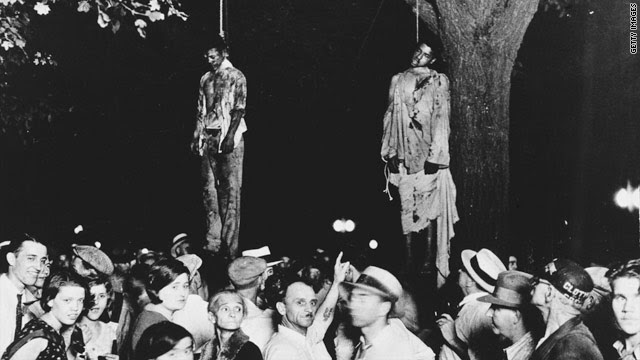 A crowd gathers in Marion, Indiana, in 1930 to witness a lynching. This photograph inspired the poem and song “Strange Fruit.”

He only worked for himself, he told his sons, because a black man couldn’t work for a white man and keep his manhood at the same time.

Once, when he was warned that a lynch mob was coming to run him out of his home, he grabbed a shotgun and waited, saying, “Let them come, because some of them will die with me.”


James Cone knew the risks his father took. So when his father didn’t come home at his usual time in the evenings, he’d stand sentry, looking for the lights from his father’s pickup truck.

“I had heard too much about white people killing black people,” Cone recalled. “When my father would finally make it home safely, I would run and jump into his arms, happy as I could be.”

Cone takes on a theological giant
Cone left his hometown of Bearden, Arkansas, and became one of the world’s most influential theologians. But the memories of his father and lynch mobs never left him. Those memories shaped his controversial theology, and they saturate his recent memoir, “The Cross and the Lynching Tree.”

Cone, who once called himself “the angriest theologian in America,” is still angry. His book is not just a memoir of growing up in the Jim Crow era; it’s a blistering takedown of white churches, and one of America’s greatest theologians, Reinhold Niebuhr - a colossal figure often cited by the Rev. Martin Luther King Jr.

Today, Niebuhr’s importance is acknowledged by both liberal and conservative Christian leaders. President Obama once called him one of his favorite philosophers. Niebuhr, the author of classics such as “The Irony of American History,” died in 1971 after a lifetime of political activism.

Cone, however, said neither Niebuhr nor any other famous white pastor at the time spoke out against the most brutal manifestation of white racism in the 20th century America: lynching.

Between 1880 and 1940, Cone says, an estimated 5,000 black men and women were lynched. Their murders were often treated as festive affairs. Women and children cut off the ears of lynching victims as souvenirs. People mailed postcards of lynchings. One postcard of a charred lynching victim read, “This is the barbeque we had last night.”

But Niebuhr said nothing about lynching, little about segregation, and once turned down King’s request to sign a petition calling on the president to protect black children integrating Southern schools, Cone said.
Niebuhr’s decision not to speak out against lynching encouraged other white theologians and ministers to follow suit, Cone said, because Niebuhr was considered the nation’s greatest theologian.

“White theologians didn’t say anything about lynching,” Cone said from his office at Union Theological Seminary in New York, where he teaches a course on Niebuhr. “I tried to find a white theologian who addressed it in a sustained way. No one did it.”

Cone’s criticism of Niebuhr baffles at least one well-known Niebuhr scholar. Charles Lemert, author of “Why Niebuhr Matters,” said King often cited Niebuhr as an inspiration. He said he’d never heard that Niebuhr rejected a petition request from King. “It would be so remote from everything the man was.”

Lemert said Niebuhr had established a long record of speaking out against racism, beginning when he became a pastor in Detroit. Niebuhr may not have spoken out against lynching and other forms of racism later on because of another reason, Lemert said.

“He had a debilitating stroke in 1951,” Lemert said. “By the time the civil rights movement was full blown, he was retired and getting ill.”
Why Cone is angry
Cone has spent much of his career condemning the white church for saying little about slavery or racial justice. Yet his pugnacious reputation doesn’t jibe with his appearance. He is a slight man with a boyish face, cinnamon complexion and dimples. He has a high-pitched voice that drips with the Southern inflections of his native Arkansas.

Cone first gained attention in 1969 with the release of “Black Theology and Black Power,” a book he wrote after urban race riots and King’s assassination.

That book took theology out of academia and placed it on the still-smoldering streets. He became known as the father of “black liberation theology.” He said God was black (he meant it figuratively) because God was closest to those who were oppressed and despised - black people in America. 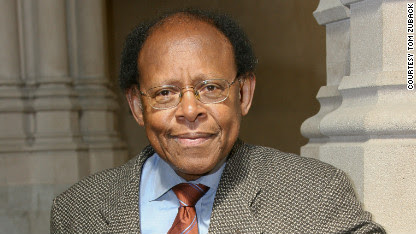 Cone said his passion for justice comes from growing up in the black church.

Cone blended the racial pride of the black power movement with an emphasis on social justice that had been a part of the black church since enslaved Africans first read the Bible. Jesus' primary message, he said, wasn't about getting people to heaven, but liberating people here and now from oppression - racial, economic and spiritual.

Cone said he was tired of white theologians writing about an otherworldly theology while cities burned and blacks were murdered by racists.

“I felt like I was the angriest black theologian in America,” he once wrote in his book “Risks of Faith.” “I had to speak out.”

Cone inspired some and angered others.

Critics say he developed a divisive, racist theology that describes God as black and whites as evil. They say he’s stuck in the '60s and never abandoned the bitterness of growing up in segregation.

Supporters say Cone exposed the hypocrisy of white churches and gave voice to helpless, poor and oppressed Christians in places as far away as China and Latin America.

The Rev. James Ellis III, an author who has been both critical and supportive of Cone, says before Cone, theology was interpreted through a white male perspective.

Cone has inspired not only blacks but also women and other racial minorities to enter seminaries and the pulpit, he says.

“Whether you agree with Cone or not, he’s definitely someone you need to deal with,” said Ellis, author of “OnThaGrindCuzin: The School Daze of Being ‘Incognegro’ in 1619.”

“He takes the gloves off and gets down to the nitty-gritty.”

Jonathan Walton, an assistant professor of African American Religious Studies at Harvard University, said listening to Cone is like “listening to a Hebrew prophet.”

For many people, Walton says, Cone “exposed that the God that they were worshiping was more consistent with the Pharaoh in Egypt than the Hebrew children.”

Cone said people still misunderstand his theology. He said he does not believe that whites are more sinful than others.

Singing about the ‘Hoochie Coochie Man’
Cone said his passion for justice comes from growing up in the black church. In his recent memoir, he describes how blacks relied on music and faith to deal with the cruelty of segregation.

On Saturday nights, he said, blacks in his hometown would go to juke joints with names like Sam’s Place to hear blues songs like “Hoochie Coochie Man.” On Sunday mornings, some of the same people would go to church to sing spirituals like “Lord, I Want to be a Christian in My Heart.”

Church comforted Cone, but it also made him ask questions.

“My thing was, if the white churches are Christian, how come they segregate us? And if God is God, why is He letting us suffer?”

The cross, he said, helped him find some answers. He said many white Christians “spiritualize” the cross, seeing it as a penalty Jesus had to pay for mankind’s sins.

But black Christians, starting with the slaves who took up the Bible, also viewed the cross as a way to cope with suffering.

Blacks looking at the images of lynching victims took heart from Jesus’ suffering on the cross and his resurrection, Cone said.

“Black Christians believed that just knowing that Jesus went through an experience of suffering in a manner similar to theirs gave them faith that God was with them, even in suffering on lynching trees just as God was present with Jesus in suffering on the cross.”

Cone also talked about his personal suffering in his memoir.

He writes about his wife, Sandra, who died of cancer in 1983. He saw her on the night she died. He said they were joking and laughing as she chided him for not leaving her hospital room to get rest.

He finally did leave, but she died at 3 that morning. Thinking about the cross helped him grieve, he said.
“God talked me through that,” he said, his voice softening. “You look suffering right in you eye and say, ‘You may get me, but you’re not going to have the last word.’ ”

Cone also talks about his parents, Charlie and Lucy, who inspired him and his two brothers. Charlie was a woodcutter who encouraged his wife to return to school, where she eventually earned a college degree.

“I didn’t grow up with a lot of fear,” he said. “I just thought my mother and father would protect me.”
One of Cone’s fears today, though, is that the contemporary black church is losing its distinctive theology.

He said there’s less talk about justice and more talk about prosperity.

“You go to almost any black church today, and you don’t hear spirituals anymore,” he said. “What you hear is this happy, ‘I’m prosperous’ kind of stuff. I’m not for that. You don’t come to church to be entertained. You come to wrestle with your spirit.”

Cone may still be angry, but he’s also mellowed. He’s tempered some of the voltage from the language he used in his earlier books. And he’s accepted criticism from some black women theologians who said he didn’t include the perspective of black women in his works.

Yet thoughts of his childhood and his parents never seem far off. In his books and lectures, he returns once again to them, especially when people compliment him for his boldness. In one essay, Cone wrote:

“At most, what I say and do are just dim reflections of what my parents taught and lived.”