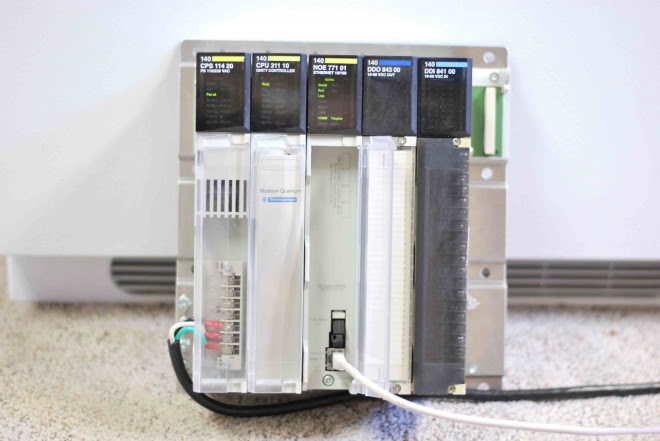 The Modicon Quantum programmable logic controller, which is used in critical infrastructure systems, contains common security vulnerabilities that would allow attackers to upload rogue commands to it. Photo: Reid Wightman/Digital Bond
Researchers have released two new exploits that attack common design vulnerabilities in a computer component used to control critical infrastructure, such as refineries and factories.
The exploits would allow someone to hack the system in a manner similar to how the Stuxnet worm attacked nuclear centrifuges in Iran, a hack that stunned the security world with its sophistication and ability to use digital code to create damage in the physical world.
The exploits attack the Modicon Quantum programmable logic controller made by Schneider-Electric, which is a key component used to control functions in critical infrastructures around the world, including manufacturing facilities, water and wastewater management plants, oil and gas refineries and pipelines, and chemical production plants. The Schneider PLC is an expensive system that costs about $10,000.
One of the exploits allows an attacker to simply send a “stop” command to the PLC.
The other exploit replaces the ladder logic in a Modicon Quantum PLC so that an attacker can take control of the PLC.
The module first downloads the current ladder logic on the PLC so that the attacker can understand what the PLC is doing. It then uploads a substitute ladder logic to the PLC, which automatically overwrites the ladder logic on the PLC. The module in this case only overwrites the legitimate ladder logic with blank ladder logic, to provide a proof of concept demonstration of how an attacker could easily replace the legitimate ladder logic with malicious commands without actually sabotaging the device.
The exploits take advantage of the fact that the Modicon Quantum PLC doesn’t require a computer that is communicating with it to authenticate itself or any commands it sends to the PLC – essentially trusting any computer that can talk to the PLC. Without such protection, an unauthorized party with network access can send the device malicious commands to seize control of it, or simply send a “stop” command to halt the system from operating.
The attack code was created by Reid Wightman, an ICS security researcher with Digital Bond, a computer security consultancy that specializes in the security of industrial control systems. The company said it released the exploits to demonstrate to owners and operators of critical infrastructures that “they need to demand secure PLC’s from vendors and develop a near-term plan to upgrade or replace their PLCs.”
The exploits were released as modules in Metasploit, a penetration testing tool owned by Rapid 7 that is used by computer security professionals to quickly and easily test their networks for specific security holes that could make them vulnerable to attack.
The exploits were designed to demonstrate the “ease of compromise and potential catastrophic impact” of vulnerabilities and make it possible for owners and operators of critical infrastructure to “see and know beyond any doubt the fragility and insecurity of these devices,” said Digital Bond CEO Dale Peterson in a statement.
But Metasploit is also used by hackers to quickly find and gain access to vulnerable systems. Peterson has defended his company’s release of exploits in the past as a means of pressuring companies like Schneider into fixing serious design flaws and vulnerabilities they’ve long known about and neglected to address.
Peterson and other security researchers have been warning for years that industrial control systems contain security issues that make them vulnerable to hacking. But it wasn’t until the Stuxnet worm hit Iran’s nuclear facilities in 2010 that industrial control systems got widespread attention. The makers of PLCs, however, have still taken few steps to secure their systems.
“[M]ore than 500 days after Stuxnet the Siemens S7 has not been fixed, and Schneider and many other ICS vendors have ignored the issues as well,” Peterson said.
Stuxnet, which attacked a PLC model made by Siemens in order to sabotage centrifuges used in Iran’s uranium enrichment program, exploited the fact that the Siemens PLC, like the Schneider PLC, does not require any authentication to upload rogue ladder logic to it, making it easy for the attackers to inject their malicious code into the system.
Peterson launched a research project last year dubbed Project Basecamp, to uncover security vulnerabilities in widely used PLCs made by multiple manufacturers.
In January, the team disclosed several vulnerabilities they found in the Modicon Quantum system, including the lack of authentication and the presence of about 12 backdoor accounts that were hard coded into the system and that have read/write capability. The system also has a web server password that is stored in plaintext and is retrievable via an FTP backdoor.
At the time of their January announcement, the group released exploit modules that attacked vulnerabilities in some of the other products, and have gradually been releasing exploits for other products since then.
- April 06, 2012

2020 and Beyond. Can we address issues for community imperative for all.

2020 and Beyond Let's address the important issues for our vulnerable communities. Questions:  Which of the following should be pro...