The Pros and Cons of Cargo Container Architecture


With the green premise growing in popularity across the globe, more and more people are turning to cargo container structures for green alternatives. There are countless numbers of empty, unused shipping containers around the world just sitting on shipping docks taking up space. The reason for this is that it’s too expensive for a country to ship empty containers back to their origin. In most cases, it’s just cheaper to buy new containers from Asia. The result is an extremely high surplus of empty shipping containers that are just waiting to become a home, office, apartment, school, dormitory, studio, emergency shelter, and everything else. More information after the break.

There are copious benefits to the so-called shipping container architecture model. A few of these advantages include: strength, durability, availability, and cost. The abundance and relative cheapness (some sell for as little as $900) of these containers during the last decade comes from the deficit in manufactured goods coming from North America. These manufactured goods come to North America, from Asia and Europe, in containers that often have to be shipped back empty at a considerable expense. Therefore, new applications are sought for the used containers that have reached their final destination.
On November 23, 1987, Phillip C. Clark file for a United States patent describe as a “Method for converting one or more steel shipping containers into a habitable building at a building site and the product thereof.” This patent was granted on August 8, 1989 as patent 4854094. The diagrams and information contained within the documentation of the patent appear to lay the groundwork for many current shipping container architectural ideas.
In 2006, Southern California architect Peter DeMaria, designed the first two-story shipping container home in the U.S. as an approved structural system under the strict guidelines of the nationally recognized Uniform Building Code. Even more impressive is Lot-Tek’s Puma City, which was built with abundant material at a low price, without substituting design quality. As such, there are many great examples of shipping container architecture in the world. 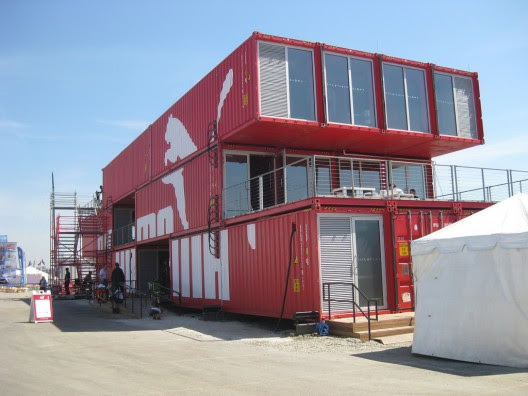 Puma City, Photo by Ari Herzog - http://www.flickr.com/photos/ari-herzog/
Shipping container architecture gets a lot of encouraging coverage in the design world as a trendy green alternative to traditional building materials, and seems like a smart choice for people looking for eco-consciousness. However, there are a lot of downsides to building with cargo containers. For instance, the coatings used to make the containers durable for ocean transport also happen to contain a number of harmful chemicals, such as chromate, phosphorous, and lead-based paints. Moreover, wood floors that line the majority of shipping container buildings are infused with hazardous chemical pesticides like arsenic and chromium to keep pests away.
Reusing containers seems to be a low energy alternative, however, few people factor in the amount of energy required to make the box habitable. The entire structure needs to be sandblasted bare, floors need to be replaced, and openings need to be cut with a torch or fireman’s saw. The average container eventually produces nearly a thousand pounds of hazardous waste before it can be used as a structure. All of this, coupled with the fossil fuels required to move the container into place with heavy machinery, contribute significantly to its ecological footprint.
Another downside is that dimensionally, an individual container creates awkward living/working spaces. Taking into account added insulation, you have a long narrow box with less than eight foot ceiling. To make an adequate sized space, multiple boxes need to be combined, which again, requires energy.
In many areas, it is cheaper and less energy to build a similarly scaled structure using wood framing. Shipping container homes makes sense where resources are scarce, containers are in abundance, and where people are in need of immediate shelter such as, developing nations and disaster relief. While there are certainly striking and innovative examples of architecture using cargo containers, it is typically not the best method of design and construction.