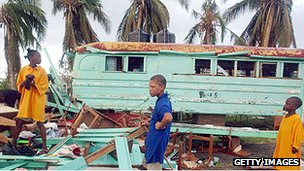 Preliminary results of the general election on the Caribbean island of Grenada suggest a landslide win for the opposition New National Party (NNP).

If the results are confirmed, Keith Mitchell, who served three terms as prime minister between 1995 and 2008, will return to power.


The main theme during the election was the economic crisis.

Grenada has a 30% unemployment rate and the Caribbean Development Bank recently warned Grenada that it had unsustainable debt levels.

During his campaign, Mr Mitchell promised to make job creation his priority.
After the preliminary results came in, catapulting his party from fours seats to 15, he said he would also strive to unite the country.

He asked Grenadians "to have patience" with the new government, and to give it a chance to implement policies he said would revive the stalled economy.

The country has been struggling to recover from major destruction caused by Hurricane Ivan in 2004.
Dozens of people were killed and 90% of the island's buildings were damaged or destroyed. Grenada's main export crop, nutmeg, was also devastated.