Washington Post. 600 homeless children in D.C., and no one seems to care

I don’t care what we call our football team. I don’t care about Lance Armstrong’s doping or RGIII’s knee, or whether Notre Dame linebackerManti Te’o knew his dead girlfriend never existed in the first place, or any of the other sports dramas we’ve spent gobs of energy on in these past few weeks.
Here’s what we ought to be talking about: 600 kids. The District has set a dubious new record for the number of homeless kids crammed inside a scary, abandoned hospital that serves as the city’s makeshift family homeless shelter.
There are about 600, according to a nightly census done by the Community Partnership for the Prevention of Homelessness.
Stop and think about that. Six hundred kids with chubby cheeks and Spider-Man sneakers and Dora hats are beginning their journey in life on an army cot in a cafeteria or an old hospital bed in a city shelter. And that’s an improvement from the time they spent sleeping in cars, bus shelters, Metro stations, apartment-house lobbies or on a different couch every night.
This, of course, is happening in the same city now rolling in a $417 million budget surplus and on track for a $240 million surplus in the coming year.
The last time anyone agonized about a capacity crowd at the D.C. General shelter, it was two years ago and there were about 200 kids there. Where have 400 more homeless kids come from, and who are these families?
There’s Alexia Sullivan, 23, who was a full-time student at Howard University until her life fell apart. She had a baby, and her tuition increased but her scholarships didn’t. She lost her apartment trying to keep up and has been in the shelter with her 1-year-old for two weeks.
And there’s Kevin Cruz, 29, who has been at D.C. General with his wife and baby since Thanksgiving. They’ve been homeless since July, when McDonald’s cut Cruz’s hours until he couldn’t afford his apartment and his wife’s part-time work at Wal-Mart didn’t provide benefits when she had their child.
They didn’t get an emergency cot until that magic number — 32 degrees — signaled the start of hypothermia season and a District law kicked in that mandates emergency shelter for anyone in the winter.
Or there’s another family, too embarrassed to let me use their names. They have a kid in college up in Maine and five younger ones at home — which is now a tiny room in the family shelter.
You think getting a spot at the shelter means a walk on Easy Street? A place for the lazy to get three hots and a cot on the government dime?
No way. This is the place of desperation.
The intake process at the Virginia Williams Family Resource Center on Rhode Island Avenue can make it feel harder to get a spot in the shelter than a seat on Air Force One.
The Washington Legal Clinic for the Homeless, whose lawyers spend endless days and late nights wrangling beds for the city’s homeless, issued a report this week on the District’s handling of this growing crisis.
“Of course the root of the whole problem is the severe shortage of affordable housing for low-income families,” said legal clinic lawyer Marta Beresin, who wants “an emergency shelter system for families that you don’t need a lawyer to navigate.”


Sullivan said shelter officials wanted a list of everyone she’s lived with in the past three years before they’d let her and her baby in while it was snowing outside. So she gave them that and the intake counselors called those people — be they abusive boyfriends or angry landlords — “no less than 20 times.”
Sullivan was lucky. After all those calls, she was given an army cot in the old hospital cafeteria, partitioned off with temporary walls that don’t reach the ceilings, MASH unit style.

No, this is not a world full of innocents. The D.C. General shelter is a showcase of bad decisions, social ills and generations of defeat.
Outside I met Asia Brown, who at 19 has more children than I do. Her 5-year-old hasn’t been in school since she got to the shelter in January. She’s waiting for paperwork to let him 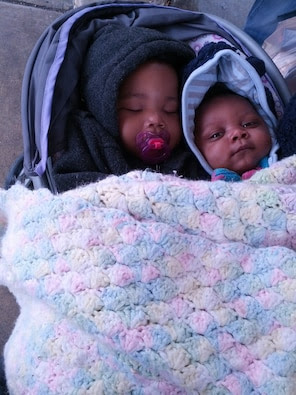 (Petula Dvorak/The Washington Post) - Elayshia Brown (left), 6 months, shares a stroller for warmth with another baby living in the District's shelter for homeless families on Friday. Elayshia's mother, Asia Brown, lost her apartment in January and wound up in the abandoned hospital, where a record of nearly 600 children are now being housed.
go to a nearby school on Capitol Hill. She also has a 2-year-old and a 6-month-old, who was squeezed into a stroller, sharing warmth with another homeless 2-month-old under a pink-yellow-and-blue baby blanket. Babies having babies.
Brown wants to get her GED and go to college, she told me. I hope she can make it, but the odds are against her.
Who pays if she doesn’t succeed? The poor kids, and the taxpayers who will have to pick up the pieces of their broken lives.
It’s almost like some bizarre “Hunger Games” alternate reality. You go 17 blocks from the Capitol, from the spot where the world went haywire because Beyonce lip-synced the national anthem, and there are cold children playing on trash-strewn concrete, fathers who can’t find work and mothers who can’t find hope.
It’s like Cindy Adams’s vision of the “crapital” come to life, and all we want to do is celebrate all the nice new restaurants and condos downtown. And look! We have cool red bikes!
These children didn’t ask to be homeless. This city needs to take ownership of this problem, come together and figure out how we can help these 600 young souls. They are an asset far more precious than any sports franchise, whatever its name.
Follow me on Twitter at @petulad. To read previous columns, go to washingtopost.com/dvorak.
at February 10, 2013