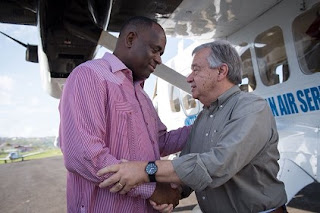 Geneva, 12 October 2017 - Following the devastation wrought on his Caribbean island home by Hurricane Maria, the Prime Minister of Dominica, Mr. Roosevelt Skerrit, is calling on the world not “to turn its back” on the problem of climate change and for greater investment in disaster risk reduction. In a message for International Day for Disaster Reduction which is celebrated around the world tomorrow, Mr. Skerrit says: “Both this year and last year all 72,000 people living on Dominica have been affected by disasters. Some have lost their roofs and livelihoods for the second time as a result of Hurricane Maria.