Access to Food. African Descent Communities in the U.S. Is this a global issue.

All Vital Roles in Recovery. Assessment of Impacts from Hurricane Lane Begins in Hawaii

What makes one island state\territory\nation so different in planning, preparedness, response, and recovery from another when disaster strikes.  Involvement of the ‘whole community’, involvement by all, taking a pro-active approach to save lives and build a more resilient community.

To our members involved in the pre-planning, and recovery of Hawaii at the federal, and State level.  Thank you for your efforts and professionalism in ensuring the swift recovery of the communities of Hawaii from Hurricane Lane.

In the private sector, small business enterprises will be the key in serving communities with vital resources for shelter, clothing, water & food, and other necessities.  Your business continuity plan (BCP) for your enterprise with aid agreements in the local communities also play a vital role in the overall emergency planning for recovery.

It is an honor and pleasure to announce the publication of our member, Dr. Morris Koffa (Lifetime) new book ‘The Ebola Epidemic in Liberia’.

There is no ‘brain drain’ from our communities, just an under-utilized, non-interactive, or non-inclusive addition of experts from the diaspora sitting and invited to the table,  Experts that not only have the problem-solving power, but as a collective the financial means to address the most pressing issues from financial inequity, homelessness, education, water & food security issues, and other social disaster\crisis\emergency management concerns.

Change without Sacrifice is an Illusion.  Lisa Ellis

Damage caused by natural disasters and recovery efforts launched in their aftermaths have increased wealth inequality between races in the United States, according to new research from Rice University and the University of Pittsburgh.
“Damages Done: The Longitudinal Impacts of Natural Hazards on Wealth Inequality in the United States” will   appear in an upcoming edition of Social Problems. A supplement to the paper highlights the wealth gap between whites and blacks attributable to natural disaster damage from 1999 through 2013 in 20 U.S. counties.
Researchers Junia Howell, a scholar at Rice’s Kinder Institute for Urban Research and an assistant professor of sociology at the University of Pittsburgh and Jim Elliott, a professor of sociology at Rice and fellow at Rice’s Kinder Institute combined longitudinal data from nearly 3,500 families across the U.S. with governmental data on local natural disaster damages, Federal Emergency Management Aid (FEMA) and demographics. They followed these people from 1999 through 2013 as disaster damage of varying scale struck counties where they lived, and examined how their personal wealth was impacted. 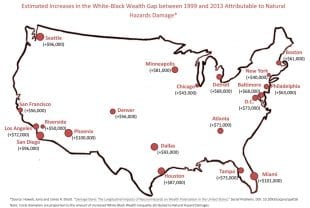