An age of conflict in personal and communal values of service.

Our oath did not just end at the end of our enlistment, discharge, or retirement. 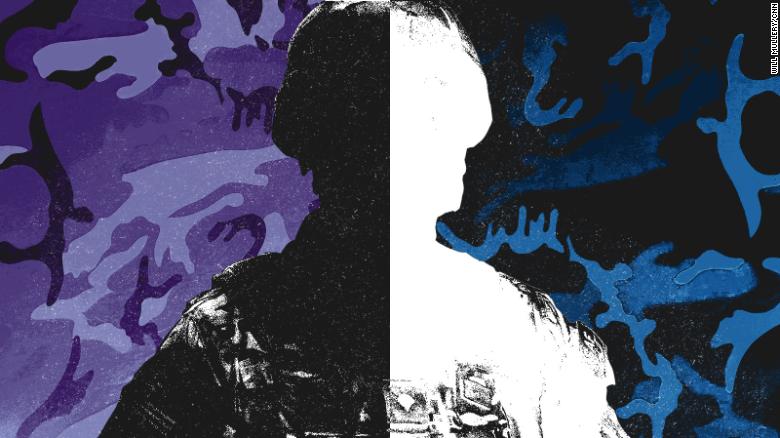 Washington (CNN)Top US military officials are seeking to reassure the nation's roughly two million active duty and reserve personnel that they are committed to addressing issues of racial inequality across the branches following George Floyd's death and protests across the country.
But the challenges they face are huge.
A CNN review of data provided by the Pentagon and Department of Veterans Affairs reveals the stark reality that black service members are less likely to become officers and, as a result, are more likely to be seriously injured serving their country than their white colleagues.
Those issues are very much intertwined, according to David Shulkin, who previously served as President Donald Trump's Veterans Affairs Secretary.
"While there's been some increase in relative numbers in minority officers, it's not been proportional to the increase that we're serving, so therefore you do have more minority members serving in the front line jobs and therefore getting higher numbers of these injuries," he told CNN in an interview Friday.
The data reviewed by CNN includes a mix of publicly available numbers and records kept by the Department of Defense.
CNN has reached out to the Pentagon for comment.

While an overwhelming majority of service members are still white, the numbers reflect a steady rise in diversity within the military that coincides with the adoption of policies of integration and equal rights for black service members in the wake of World War II.
Less than 10% of World War II veterans were minorities but since then, each veteran cohort has been more diverse than the last.
Of the veterans who have served since September 11, 2001, 35% are minorities, according to the data reviewed by CNN. Black veterans make up 15% of veterans who have served since then. 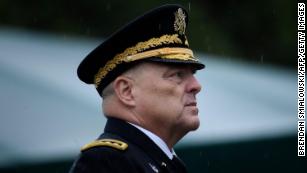 America's military leaders take a stand as Trump remains silent on racial inequality
While integration policies were adopted by the Army and Navy well before many states in the South and other American institutions took similar steps, it took years before the changes were enforced, resulting in retention issues for the branches, according to the Department of Defense.
Significant support for segregation in the Army continued into the early 1950's and the service did not complete its integration until 1954, according to the Pentagon.
MORE FROM CNN POLITICS
Current and former service members have been quick to point out that even though today's military is significantly more diverse than it has ever been, there are still major challenges to be met.
"As a society, we are just now, hopefully, dealing with the original sin and dealing with a lot of the underlying issues of race and inequality. So the military has not been isolated from that," Bishop Garrison, a black West Point graduate who served two tours in Iraq, told CNN.

One of those issues is the lack of minority service members in leadership positions.
Black service members are still disproportionately under-represented among the officer ranks despite enlisting at a higher rate than other minorities and whites relative to their share of the US population, Department of Defense data shows.
Black service members represent 19% of all enlisted personnel, but just 9% of officers.
For white service members, the trend reverses. Two-thirds of all enlisted service members are white. But among officer ranks, more than three-quarters are white.
It is an issue that has been highlighted in the wake of Floyd's death, most notably in a post from the Air Force's top enlistee earlier this month.
Chief Master Sgt. Kaleth Wright, who's responsible for 410,000 enlisted members, said his "greatest fear" is "not that I will be killed by a white police officer (believe me my heart starts racing like most other Black men in America when I see those blue lights behind me) ... but that I will wake up to a report that one of our Black Airmen has died at the hands of a white police officer."
He also outlined his struggle with the "Air Force's own demons" of racial disparities in military justice and discipline and the "clear lack" of diversity in leadership.
Current and former service members have echoed that point, suggesting issues like the lack of diversity in leadership roles continues to have a direct impact on the retention and recruitment of minorities.
"The fact is that had I been afforded more direct mentorship and more examples of leaders who reflected my own life experience, I would have been more likely to remain a member of the Army. Like my father a half century before me, I decided to seek out other ways to continue serving my community and country," Garrison, who current works as Human Rights First's chief ambassador to the national security community, told the House Armed Services Committee in January.
Garrison also told lawmakers that some of the current administration's policies are also having a negative impact on the recruitment and retention of minority service members.
"The fact that many major military bases are still named after Confederate leaders; the ongoing worries about white nationalism in the military's ranks; and the fact that an individual who holds extreme views on race, continues to serve at the highest level of immigration policy-making -- these factors risk causing a detrimental impact on our military's ability to recruit and retain new and diverse talent," he said during his testimony before the committee.

First black service member to lead a US military branch

The lack of diversity at the highest levels of the military was highlighted yet again this month when the Senate voted to confirm Gen. Charles Q. Brown as the first black service member to lead an American military branch earlier this week.
While Brown's confirmation has been applauded as a historic moment for the military, the fact that it took place more than 70 years after President Harry S Truman's executive order that desegregated the services underscores the incremental pace at which change has occurred.
Prior to his confirmation, Brown reflected on the impact of Floyd's death while addressing some of the challenges and fears that he has endured as a black service member. 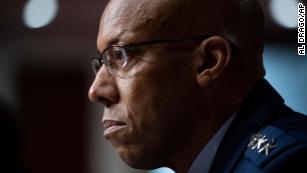 First black service chief in US military history confirmed by Senate
In a moving, deeply personal video, Brown said he was "full with emotion" for "the many African Americans that have suffered the same fate as George Floyd."
He also described being one of the only African Americans at his school and often being the only African American in his platoon, and later, in leadership.
"I'm thinking about a history of racial issues and my own experiences that didn't always sing of liberty," Brown said. "I'm thinking about wearing the same flight suit with the same wings on my chest as my peers and then being questioned by another military member: 'Are you a pilot?'"
"I'm thinking about the pressure I felt to perform error-free, especially for supervisors I perceived had expected less of me as an African American. I'm thinking about having to represent by working twice as hard to prove their expectations and perceptions of African Americans were invalid," he added.
Brown said he hopes he can help address some of those issues in his new role as the first African American chief of staff for any military branch.
"I'm thinking about how my nomination provides some hope, but also comes with a heavy burden. I can't fix centuries of racism in our country, nor can I fix decades of discrimination that may have impacted members of our Air Force. I'm thinking about how I can make improvements personally, professionally, and institutionally, so that all Airmen, both today and tomorrow, appreciate the value of diversity and can serve in an environment where they can reach their full potential," he said.

For minority service members, and black veterans in particular, the challenges they face while in the military have had a direct impact on their long-term health.
A review of VA data shows that black veterans are more likely to sustain severe injuries during their service -- a trend that is directly linked to the fact that they are disproportionately working "frontline jobs" during their time in the military, according to Shulkin.
"In the VA system you're seeing a reflection of what has come from the Department of Defense, which is a growing proportion of minorities or serving many of them in frontline roles," he told CNN.
The Department of Veterans Affairs assigns injured veterans a "disability rating," which represents how much a service-related injury affects their earning ability.
The ratings determine the amount of the monthly benefit they should receive as compensation. They range from 0% to 100% -- the higher the rating, the more severe a veteran's disability.
Nearly 31% of injured black veterans have a disability rating of 70% or higher, compared with around 23% of white injured veterans," according to the data.
"The disability rating is an indicator of the severity of the injury and the disruption to life after serving," Shulkin said, adding that the current data is a reflection of the numbers of minorities who are serving as well as the roles and categories of job duties that they are doing in the military.
"While our minority communities are shouldering the disproportionate share of service to the country, they are not necessarily, being represented in the more senior positions to that same level," he added.
Those numbers become even more troubling given the fact that the minority veteran population is projected to increase over the next 20 years despite the fact that the total number of veterans is expected to decrease over that same time period, according to the VA.