As a freelance news videographer working on stories about police-involved shootings, Darnley Hodge Jr. watched hours of film showing White police officers shooting and beating unarmed Black people. He listened to countless 911 calls made by White people allegedly alarmed by Black people engaged in activities such as sitting in a coffee shop, barbecuing in a park, walking home wearing a hoodie in the rain.
Each encounter left him with the same question: “I wanted to know what was producing the mentality that caused White people to behave that way,” Hodge said. But most of the coverage of such incidents focused on the Black victims and relatively little about the White people who were involved.

“Even the discussions I was hearing lacked context and tended to devolve into whether or not the Black person ‘deserved it,’ ” he recalled. 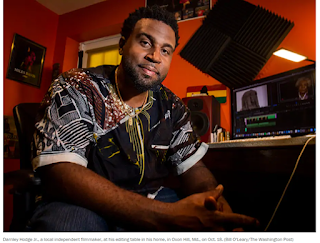 A graduate of Virginia Commonwealth University with a master’s degree in film from American University, Hodge started his own production company while in his mid-20s. He shot film for D.C.’s WJLA-TV, CNN and other national news outlets. He set up a film editing bay in the basement of his home in Oxon Hill, Md., which he shares with his wife and three children. It makes it easier to work around-the-clock when up against a tight deadline.

Because he had the skills and equipment, Hodge decided to answer his own question. And now, at age 43 and after more than five years’ effort, he has produced a compelling film about his findings — a documentary called “The American LOWS” (an acronym for Legacy of White Supremacy).

“I was aware from my own life experiences that there is a component of American culture that values Whiteness over Blackness, and it wasn’t born in any police department,” Hodge said. “But police departments are affected by that culture, along with every other institution. I wanted to construct a narrative about where that mentality came from and how it endures.”

Those life experiences included attending a racially integrated elementary school in Alexandria, Va., where, he says, teachers often punished Black students for engaging in behavior that was overlooked when done by White students, such as passing notes or laughing at fellow students for giving a wrong answer.

While attending a middle school near Winchester, Va., he says White students taunted him with racially derogatory names such as “darky.”

His family moved back to Alexandria in time for him to attend Mount Vernon High. There, in his media arts class, he was introduced to TV production, which he enjoyed so much he made a career of it.

His film on white supremacy recently premiered at the San Antonio Black International Film Festival, where it was well received. At the event, which was held on Zoom, Hodge explained that he wanted to make a film that would “help African Americans to better understand the system and culture of white supremacy in order to effectively counteract it.”

Either one of those would probably require at least a lifetime of learning. But the film does offer a timely primer on the subject.

It begins with Jacqueline Battalora, author of “Birth of a White Nation: The Invention of White People and Its Relevance Today,” explaining how white supremacy became legalized in Colonial America and why it stayed that way into the 1950s.

Or, as attorney Paul Butler, author of “Chokehold: Policing Black Men,” puts it in the film, how “keeping Black people down is built into the law.”

There is stock film footage of white supremacists marching with tiki torches in Charlottesville. As their chant “You will not replace us” fades out, D.C.-based psychiatrist Frances Cress Welsing — in her last videotaped interview before her death in 2016 — begins an analysis of the intent of such marchers.

“They understand what they are doing,” she said. “They are not playing games about what their issues are. They are dealing with the problem. And we are the problem.”

That’s when the documentary explodes into gunfire. We see Levar Jones, with his hands up, being shot by South Carolina Trooper Sean Groubert after a traffic stop.

We see Minnesota police officer Jeronimo Yanez firing into a car and then video of a bleeding Philando Castille taken by his girlfriend seated next to him.

That is followed by North Charleston police officer Michael Slager firing his .45-caliber Glock handgun eight times as the unarmed Walter Scott ran from him. Scott died after being hit five times — three in the back, one in the buttocks and one in the ear.

Eventually, we get to Minneapolis police officer Derek Chauvin, a hand casually placed in his side pocket while nonchalantly pressing a knee into George Floyd’s neck. Chauvin ignores the pleas of passersby not to kill Floyd and keeps the pressure on for seven minutes and 46 seconds. Floyd dies.

Hodge had braced himself for the task. He knew that going through hours and hours of cellphone and dash-cam video would be difficult. But it was necessary.

For insight about the challenges that police officers face, Hodge did not have to go far. His father, Darnley Hodge Sr., was a career law enforcement officer who was brought in to lead a court-ordered reform of the New Orleans city jail. Before that, he had been a military police officer and had served as superintendent of the Riverside Regional Jail in Prince George, Va. Hodge Sr. said he thought his son’s critique of white supremacy and law enforcement was fair. “Quite honestly, he has raised my consciousness, awakened me to some of the realities of white supremacy that I did not understand,” he said.

In 2016, Hodge Jr. spent three months in the Prince George’s County Citizens’ Police Academy, which is billed as an opportunity for civilians to learn rudimentary police procedure.

“I just wanted to get a closer look at police work,” he said. “This was not a culture that I was unfamiliar with, being the son of a police officer. But I did gain some insights, and I certainly didn’t go into this project with an ax to grind.”

To complete the film, Hodge traveled to Egypt and toured parts of the Nile. He interviewed cultural historians and anthropologists who gave him background on Africans who had journeyed to the Americas long before Christopher Columbus.

“For African Americans to really know what is possible for the future, we have to see what our people have already accomplished,” he said. “It is awe-inspiring. Sometimes our concept of ourselves is so limited because we can only see ourselves through the lens of White people. We need a wider lens.”

Hodge’s film gives us that lens. And much more.