The Water Defenders with Busboys and Poets 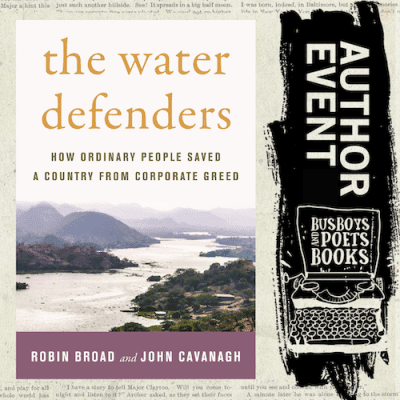 Join us online for Busboys and Friends: A Virtual Dinner Party hosted by CEO and Founder, Andy Shallal with a special dinner guests Robin Broad and John Cavanagh, authors of “The Water Defenders: How Ordinary People Saved A Country From Corporate Greed“.

The David and Goliath story of ordinary people in El Salvador who rallied together with international allies to prevent a global mining corporation from poisoning the country’s main water source. At a time when countless communities are resisting powerful corporations–from Flint, Michigan, to the Standing Rock Reservation, to Didipio in the Philippines, to the Gualcarque River in Honduras–The Water Defenders: tells the inspirational story of a community that took on an international mining corporation at seemingly insurmountable odds and won not one but two historic victories. In the early 2000s, many people in El Salvador were at first excited by the prospect of jobs, progress, and prosperity that the Pacific Rim mining company promised. However, farmer Vidalina Morales, brothers Marcelo and Miguel Rivera, and others soon discovered that the river system supplying water to the majority of Salvadorans was in danger of catastrophic contamination.

Robin Broad is an expert in international development and was awarded a prestigious Guggenheim fellowship for her work surrounding mining in El Salvador, as well as two previous MacArthur fellowships. A professor at American University, she served as an international economist in the US Treasury Department, in the US Congress, and at the Carnegie Endowment for International Peace. Broad and her husband, John Cavanagh, have been involved in the Salvadoran gold mining saga since 2009. They helped build the network of international allies that spearheaded the global fight against mining in El Salvador and have co-authored several previous books together.

John Cavanagh is director of the Washington, DC-based Institute for Policy Studies, an organization that collaborates with the Poor People’s Campaign and other dynamic social movements to turn ideas into action for peace, justice, and the environment. Previously, he worked with the United Nations to research corporate power. Cavanagh and his wife, Robin Broad, have been involved in the Salvadoran gold mining saga since 2009. They helped build the network of international allies that spearheaded the global fight against mining in El Salvador and have coauthored several previous books together.

Order your favorite meal and beverage from Busboys and Poets, set your table, download one of our optional virtual backgrounds, and tune in for a special dinner with Andy, Robin, and John.

“Bravo to the courageous Salvadorans—and their likely and unlikely allies—who prove that victories against overwhelming odds are possible. If they can defeat Big Gold, then surely we can have other big wins too. The water defenders of El Salvador and their international partners provide a powerful guidebook, poignantly retold by Broad and Cavanagh, of how the struggles for justice in the United States can link with allies abroad to build power and win.”
—Opal Tometi, cofounder, Black Lives Matter

“Broad and Cavanagh are masterful storytellers. The words, deeds, and stories of people in El Salvador come alive so vividly in these pages to reinforce what we in the Poor People’s Campaign in the United States know well: the most powerful defenders of water, of the environment—of justice across the board—are poor people. Read this book to understand how determined people can build a moral movement and defeat policy violence.”
—Rev. Dr. William Barber II, national co-chair of the Poor People’s Campaign and author of The Third Reconstruction