India and Pakistan heatwave is 'testing the limits of human survivability,' expert says. CNN Mon May 2, 2022

India and Pakistan heatwave is 'testing the limits of human survivability,' expert says

A pedestrian on a hot summer day at Connaught Place on April 30 in New Delhi, India.

Delhi (CNN)Temperatures in parts of India and Pakistan have reached record levels, putting the lives of millions at risk as the effects of the climate crisis are felt across the subcontinent.

The average maximum temperature for northwest and central India in April was the highest since records began 122 years ago, reaching 35.9 and 37.78 degrees Celsius (96.62 and 100 degrees Fahrenheit) respectively, according to the Indian Meteorological Department (IMD).
Last month, New Delhi saw seven consecutive days over 40 degrees Celsius (104 Fahrenheit), three degrees above the average temperature for the month of April, according to CNN meteorologists. In some states, the heat closed schools, damaged crops and put pressure on energy supplies, as officials warned residents to remain indoors and keep hydrated.
The heatwave has also been felt by India's neighbor Pakistan, where the cities of Jacobabad and Sibi in the country's southeastern Sindh province recorded highs of 47 degrees Celsius (116.6 Fahrenheit) on Friday, according to data shared with CNN by Pakistan's Meteorological Department (PMD). According to the PMD, this was the highest temperature recorded in any city in the Northern Hemisphere on that day. 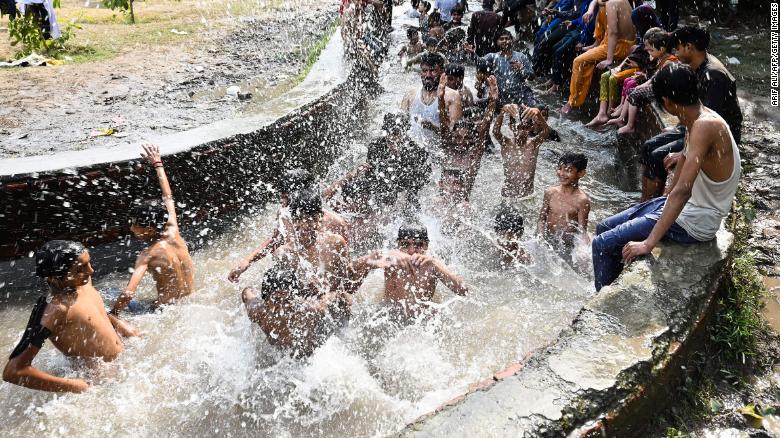 People cool themselves in a canal in Lahore, Pakistan, on April 29.
"This is the first time in decades that Pakistan is experiencing what many call a 'spring-less year," Pakistan's Minister of Climate Change, Sherry Rehman said in a statement.
Temperatures in India are expected to subside this week, the IMD said, but experts say the climate crisis will cause more frequent and longer heatwaves, affecting more than a billion people across the two countries.
India is among the countries expected to be worst affected by the impacts of the climate crisis, according to the Intergovernmental Panel on Climate Change (IPCC).
"This heatwave is definitely unprecedented," said Dr. Chandni Singh, IPCC Lead Author and Senior Researcher at the Indian Institute for Human Settlements. "We have seen a change in its intensity, its arrival time, and duration. This is what climate experts predicted and it will have cascading impacts on health."

India often experiences heatwaves during the summer months of May and June, but this year temperatures started rising in March and April.
In the northern state of Punjab, known as "India's bread basket," that's causing heat stress, not only for millions of agricultural workers, but for fields of wheat they rely on to feed their families and sell across the country.
Gurvinder Singh, director of agriculture in Punjab, said an average increase of up to 7 degrees Celsius (44.6 degrees Fahrenheit) in April had reduced wheat yields.
"Because of the heatwave we've had a loss of more than 5 quintal (500 kilograms) per hectare of our April yield," Singh told CNN Monday.
Chandni Singh, from the IPCC and no relation to Gurvinder Singh, said agricultural workers were more likely to suffer from the oppressive heat.
"People who work outdoors -- farmers, those in construction, manual labor -- will suffer more. They have less options to cool down and can't stay away from the heat," she said. 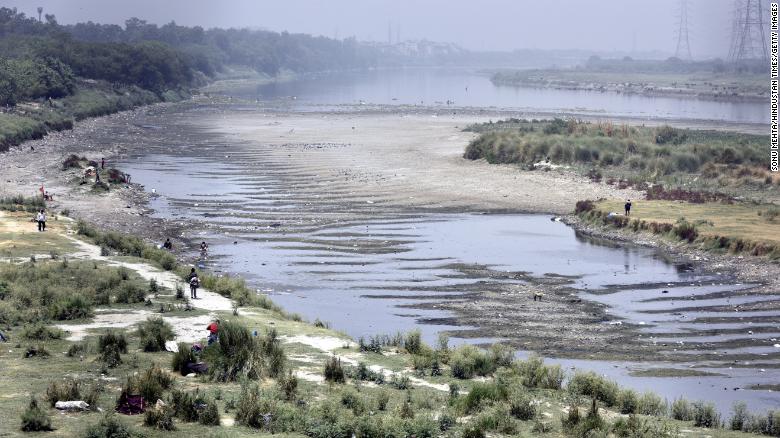 The Yamuna River on May 1 in New Delhi, India.

In some parts of India, demand for electricity has led to a coal shortage, leaving millions without power for up to nine hours a day.
Last week, coal stocks at three out of the five power plants Delhi relies on to supply its power reached critically low levels, dropping below 25%, according to Delhi's Power Ministry.
India canceled more than 650 passenger trains through the end of May to clear tracks for more cargo trains as the country scrambles to replenish coal stocks at power plants, a senior official from the country's Railways Ministry told CNN.
Indian Railways is a key supplier of coal to power plants across the country. 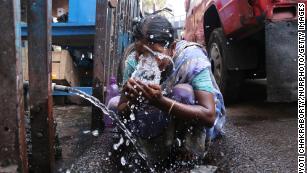 India has seen months of extreme heat and this week it will only get hotter
Some Indian states, including West Bengal and Odisha, have announced school closures to deal with the rising temperatures.
"Children who have to traveled to school, many of them are getting nosebleeds, they can't tolerate this heatwave," West Bengal's Chief Minister Mamata Banerjee told reporters last week.
In recent years, both the federal and state governments have implemented a number of measures to mitigate the effects of heatwaves, including shutting down schools and issuing health advisories for the public.
But according to Chandni Singh, more should be done to prepare for future heatwaves.
"We don't have a heat action plan and there are gaps in planning," Singh said. "You can only adapt so much. This heatwave is testing the limits of human survivability."
at May 02, 2022