The Ethiopian government and the African Union's disassociation of Emperor Haile Selassie I from the history of Pan Africanism and the Organization of African Unity is akin to disassociating Dr. Martin Luther King from the Civil Rights Movement

One of His Majesty Haile Selassie I's greatest accomplishments, and there were many, was to bring two differing political groups together to establish "an organization that wold unite all of Africa,"  In recognition of this great achievement thirty-two members of the OAU voted HIM  "Father of African Unity".  Today, the Name  of Emperor Haile Selassie I is barely mentioned and His accomplishments are no longer recognized in His own country nor by the by very organization which he caused to be established.   It is important that we remember him and boldly speak His Name and His accomplishments at home and abroad and separate history from politics because history must be free of political influence and ethnic ideologies.
To:
H.E. Dr. Jean Ping, Chairperson, African Union
His Excellency Hailemariam Desalegn, Prime Minister of Ethiopia
The Honorable Girma Wolde Giorgis, President of Ethiopia
Excellency John Dramani Mahama, President of the Republic of Ghana
We appreciate Ethiopian President Girma's call for a statue to be erected in honor of Emperor Haile Selassie I's contributions to the Organization of African Unity OAU; most importantly it was refreshing to hear how President Girma's acknowledged of His Majesty as "The 1st Leader of Africa." We encourage the Ethiopian government and the African Union leadership to join with President Girma to insure His Majesty is granted his rightful place in OAU history and that His legacy as a great world statesmen is honored, in his own country and the world as Father of African Unity and the first President of the OAU. This would correct the AU and Ethiopia's past historical errors and omissions and send a message to the world that the Democratic Republic of Ethiopia realizes the importance of separating politics from true history even when the Government doesn't support it.

Those of us who remember recall that it was Emperor Haile Selassie I who played a pivotal role in the establishment of the OAU, not Kwame Nkrumah and it was His Majesty who was unanimously voted “Father of African Unity” by the original members of the OAU, not Kwame Nkrumah. Why then would the AU and the Ethiopian government continue to ignore to His Majesty contributions while bestowing their highest honors on Nkrumah, and in so doing rewrite the history of the OAU and the Pan-African Movement?

We are all pleased to see that Ethiopia is on a path of change and we pray it will continue, for the greatest good of all, regardless of ethnic group, political ideology or religion, for it is important for Ethiopia to separate the politics of ethnic prejudice and historical bias from its ancient and modern history because such thinking has no place in deciding the history of any nation.

May the Holy Spirit direct the Government of Ethiopia and the AU leadership to make the right decision to give Emperor Haile Selassie His rightful place in history as the Father of African Unity and the OAU's first president. AMEN.

Respectfully,
The Queen of Sheba Research Foundation
Sincerely
- May 28, 2013 No comments: Links to this post

Join us Monday, May 25th from 2:40-3:55pm PST to celebrate Africa Day! Executive Director of African Coalition, Senait Admass u, will... 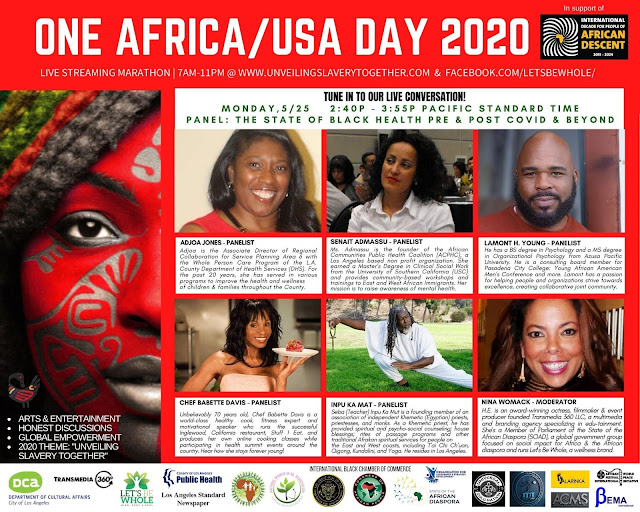