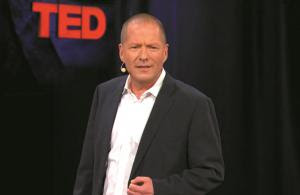 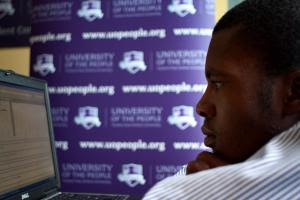 A student studying at the online university
With an estimated 425,000 matriculates seeking tertiary education this year, UoPeople offers matrics tuition-free, accredited online university degrees
The right to a quality education mustn’t be a matter of one’s geographical or financial situation. Access to education must be an equal and basic right for all, rather than a privilege for the few.
— President Shai Reshef
PASADENA, CALIFORNIA, UNITED STATES, January 19, 2015 /EINPresswire.com/ -- 1,000 South African High School Graduates to Access Tuition-Free Degrees Online

University of the People (www.UoPeople.edu) President Shai Reshef has announced 1,000 places for South African students at the non-profit, tuition-free, accredited, online American university for 2015. The decision comes following the news of matric results earlier this month pointing to an education crisis in South Africa.

On January 5th South Africa’s 2014 school pass rates of final year students were released, indicating a discouraging drop for the first time in five years after changes to the education system. Low quality educational standards have constrained growth in Africa’s second-largest economy, with businesses struggling to employ skilled workers in a country with over a 25 percent unemployment rate. 70 percent of the jobless in South Africa are under 35. In a survey last year by the World Economic Forum, South Africa’s education system was ranked the fifth-lowest among 144 countries, with its score in mathematics and science the worst of the group.

University of the People presents a genuine alternative for South African high school graduates who luck out of securing limited seats in local universities. “There is no need for the thousands of qualified high school graduates who will be left out of higher education this year to remain shut out,” says President Reshef. “University of the People identifies South African high school graduates as students who are driven and ambitious and particularly in need and deserving of access to quality higher education. The right to a quality education mustn’t be a matter of one’s geographical or financial situation; Access to education must be an equal and basic right for all, rather than a privilege for the few.”

University of the People believes that access to higher education is a key ingredient in the promotion of financial stability, leading to global economic development and peace. Dedicated to democratizing higher education globally, University of the People exemplifies employing an online solution for potentially millions of people. The University has enrolled students from 150 different countries to date, including 44 from South Africa, where retention rates are comparatively high.

University of the People is changing the way online learning is perceived through international accreditation, alliances with prestigious educational institutions (such as Yale University for research and New York University for accepting students) and partnerships with global corporations (such as Hewlett-Packard for internships and Microsoft for scholarships). The unique focus at the online University is on small classes, peer interaction and personal attention. Online access need only be basic – broadband connections and video capability are not required.

The University offers degrees in Business Administration and Computer Science on a tuition-free basis. Students only pay for exam processing fees of $100, meaning that a student can study towards an accredited Bachelor’s Degree for as little as $4,000.

South Africa, take heed – young adults in need of education can be serviced with the delivery of quality education at low-cost. It is the viable solution to conquering inequalities in educational attainment and is available at everyone’s fingertips.
at January 22, 2015