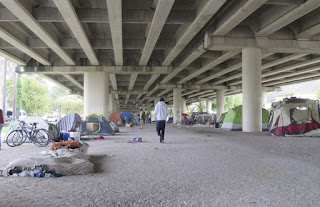 How Houston Has Virtually Ended Homelessness Among Veterans


Inside an abandoned warehouse on the northern end of downtown Houston is an encampment where approximately 20 homeless people stay each year. The ground is covered with cardboard, old newspapers, and plastic bottles of water coated in grime. On one wall, a mural reads: “Look for the Beauty Within the Most Frightening.” At the moment, there’s no one here.

The people who live in this “community,” as retired Houston Police Sergeant Steve Wick describes it, have been asked to clear out for the occasional hazmat sweep of the area, which he says can cost up to $60,000 each time. They’ve done two such sweeps in the past year, and the last one was a multi-day effort to remove accumulated debris.
“You have people that are sleeping on the same ground they’re going to the bathroom on,” Wick says, noting that it’s a major health risk, especially for fecal-born illnesses like hepatitis.

Wick, who led the homeless outreach team for the Houston Police Department until his retirement in January of 2019, would pass out water bottles every week as he made rounds through each of Houston’s three major homeless encampments and visit another half-dozen popular bridges or intersections where homeless people congregate. His goal was to convince as many as possible to connect with some of Houston’s social services and seek permanent housing, or possibly mental-health or drug addiction treatment.

Houston, which is held up as a model of success in finding permanent housing for homeless veterans, has in many ways an ideal team of people working to find solutions for the chronically homeless: an engaged police unit, a seasoned group of social and policy workers, and a city looking to innovate and improve. But finding homes for non-veterans who are chronically homeless involves more challenges, and the city’s homeless leaders are looking for creative ways to find solutions through collaboration and reducing bureaucratic hurdles.
***
In 2015, three cabinet secretaries—of labor, housing and urban development, and veterans affairs—came to Houston for a celebration. The fourth-largest city in the country had reached an unprecedented achievement: Houston had found homes for 3,650 veterans in just three years.

The coordinated efforts stemmed from a Department of Housing and Urban Development (HUD) training in Florida in 2011, where heads of the Houston and Harris County housing authorities, directors of city and county housing development departments, the regional unit of the Department of Veterans Affairs (VA), and those in Houston who were locally funded to do veterans work, sat together at one table to talk about Houston and Harris County’s homelessness problem. The group that came out of that training, Housing Houston’s Heroes, started off with a modest goal: to find permanent homes for 100 veterans in 100 days.
“When you pair HUD money with VA money for veterans, you can create a system that is on steroids.”
They mapped out how many different steps a veteran would have to take to get into permanent housing and found that the process required over 150 different steps, from securing a photo ID and birth certificate to filling out nearly identical paperwork for the housing authority and the VA—the sort of bureaucratic obstacles that can be daunting for anyone, even the most organized professionals.

“We got it down to 50 to 60 steps,” says Eva Thibaudeau-Graczyk, vice president of programs for the Houston Coalition for the Homeless. The process of streamlining these steps included changing the documents required by the local housing authority to include alternate forms of ID, and having the VA and housing authority share paperwork.

“We started to learn the power of navigation, and take [homeless veterans] one-on-one through each step of the process,” Thibaudeau-Graczyk says. “We’d drive them, wait with them, visit properties with them too.”

They also began organizing housing events through the Houston Housing Authority, whereby landlords could directly connect with people who needed homes, while staff would be on hand to process paperwork, background checks, and housing assistance.

In 2011, Houston had 8,538 people experiencing homelessness on a single night; by 2015, 3,652 of those people—the homeless veterans—had found homes. Once the city had established such high success metrics in solving homelessness among veterans—a press releasedeclared an “effective end” to veterans’ homelessness in Houston—the coalition turned its focus to chronic homelessness.

But in the years that followed, even with improvements, the same accountability and streamlining efforts haven’t worked as well with the non-veteran population.

“In non-veteran homelessness, the only federal agency that has money to do anything is HUD, and it’s a small amount of the overall budget,” Thibaudeau-Graczyk says. “When you pair HUD money with VA money for veterans, you can create a system that is on steroids.”

Wick, who worked with homeless populations from 1994 through 2018, first as a bicycle officer and then as the leader of the homeless outreach team, says that solving homelessness is not as simple as just connecting someone with the right caseworker or apartment. It requires support from social services, long after the apartment keys have been handed over. This is especially true when it comes to finding shelter for the chronically homeless—people with four or more episodes of homelessness within the past three years for a total of 12 months or longer, or one or more current consecutive years of homelessness.

Wick tells the story of Felicia, a woman with a traumatic brain injury, mental-health impairments, and incontinence, who spent years between the street, hospitals, and jail. Wick followed her progress through this broken cycle and realized she needed a guardian who could manage her disability payment. He referred her to Harris County Guardianship, where, after an investigation and capacity assessment, she was given a guardian, who found her a personal care home. Felicia went back to the street again, but this time the guardian intervened, and Wick says that Felicia’s been off the street since early 2018.

But that effort took years of sustained, dedicated police work, and for a woman like Felicia, positive changes and stability are not always permanent.

“People who live on the streets are a community—they like hanging out with like-minded people,” Wick says. Without a support network, a sense of belonging, they often return to the street.
***
Houston Police Commander Bill Staney had always seen the homeless encampments under the IH-59 overpass in Houston during his 37 years as a police officer, but it wasn’t until he was assigned to the homeless outreach team that he went to look inside.

Now, once a week, Staney or someone from his team gives an update at the Houston Coalition for the Homeless meetings at the Beacon, Houston’s largest day shelter, which sits downtown, a few blocks from Minute Maid Park. Staney and his team have a list of names of the chronically homeless who need (and are willing to go to) permanent housing.

Those unwilling to move are allowed to stay in the encampment, as long as they follow certain rules that keep the place safe and livable. Houston’s encampment ordinance limits excess accumulation of property: Occupants of public areas are permitted one tent, a bike, durable medical equipment, and the equivalent of three cubic feet of belongings not considered infected or a health hazard.

In the 100-person meeting, caseworkers can check where their clients’ names are on the waiting list for permanent housing, and how long it will take, or what paperwork or forms of identification are needed. If there is a gap or a flag, someone from case management, Houston Coalition services, city police, or public transit police may be there to answer it.
“Homelessness is a sign of a society that is in the process of breaking down. By the time people hit the street, they are there for a reason.”
The goal is that there are no hold-ups or missed emails or bureaucratic obstacles, so that anyone who wants to transition from chronic homelessness to permanent housing will have few if any delays in doing so.

Ana Rausch, senior research project manager for the Houston Coalition for the Homeless, says that people in Houston still see homeless people panhandling on the street or huddled in encampments, and may be largely unaware of all the work the coalition has done in finding permanent homes for over 15,000 people since 2012. But that still leaves 4,143 people sleeping on the street or in shelters, by Houston’s own count. (For comparison, 3,675 people sleep on the streets in New York City, a number that does not include the 60,000-plus homeless New Yorkers who sleep in shelters).
Wick acknowledges Houston’s success with ending homelessness among veterans, but sees that group as only a small subset of the homeless population. He’s skeptical of numbers that suggest Houston’s broader homeless efforts have been a success, calling the metrics of doing a homeless count “flawed at best.”

“By definition, homeless people are people without homes, so you don’t know where to find them,” Wick says. Describing the methodology behind the HUD counts, he says, “They give a section of the city to people who aren’t familiar with the city, they look for people. They see a man with a backpack, they count them as homeless. They see a vacant house, they assume there are homeless people in the house.”

But progress—or even incremental improvement—isn’t the same as a solution, and a solution doesn’t come from a press release announcing that one city has found a way to end homelessness. The complex nature of chronic homeless and the chaos that permeates the lives of people who live on the street—including those who prefer the community of street living over stable housing—mean that even the most well-intentioned programs and community support may not be sufficient to solve the individual problem.

“When you look at government dollars, there are very specific things and ways in which those dollars can be spent, and a high level of oversight on those, and rightly so,” Thibaudeau-Graczyk says. “The reality is that, in human lives, it’s a lot messier than that. You end up needing money for situations that aren’t in federal regulations.”
The problems that accompany chronic homelessness—broken families, addiction, illness, and poverty—may have overlapping causes and solutions, but each homeless case requires individual attention and work. It’s a time-intensive process without easy solutions, and the transient nature of a population with such unpredictable and rapidly changing circumstances means that it’s hard to generate concrete metrics, which many federal programs require to show success.

“Homelessness is a sign of a society that is in the process of breaking down,” Wick says. “By the time people hit the street, they are there for a reason.” The homeless people he’s looked after, Wick says, “have made a lot of poor life decisions—they have reasons that make it very hard for them to get off the street.”
Wick mentions one of his officers who spends his free time volunteering with disadvantaged youth, providing some stability in their lives.

“He is doing more to prevent future homelessness than most are,” Wick says. “Attacking it from this end, I don't think there is a whole lot you can do except one person at a time. See one person, tackle their issue, help the one person off the street.”

Even in a city like Houston, where a measure of successful work with homelessness has garnered national attention, the work continues, with no immediate end in sight.
Support for this article was provided by Rise Local, a project of the New America National Network.
This story originally appeared on Pacific Standard, an editorial partner site. Subscribe to the magazine in print and follow Pacific Standard on Twitter to support journalism in the public interest.