Lt. Quention “Que” Curtis founded the Black Fire Brigade as a place for Black firefighters to find fellowship and to mentor young Black people interested in joining the department. Curtis spent more than 30 years working for the Chicago Fire Department and had grown frustrated from watching the department’s racist hiring practices that led to almost $100 million in lawsuits in the past decade. He decided to create a space for retired, current, and prospective Black firefighters to engage with and train each other. 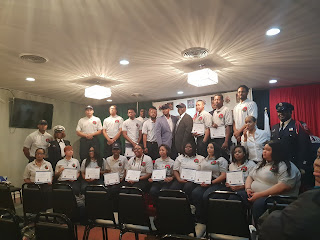 After a long career as a firefighter, and dedicating hours to building his new organization, Curtis finally witnessed the fruits of his labor with a class of over 20 young Black people graduating from the training center.

“The Black Fire Brigade’s vision was to have a place for mentoring, support, training, historical remembrance, and a community for firefighters, EMS personnel, and the next generation of leaders,” said Ald. Derrick Curtis (18) to a room of approximately 200. The Black Fire Brigade is located in Ald. Curtis’ ward, at 8404 S. Kedzie, in the Ashburn community.
Other political heavyweights such as State Representative Mary Flowers, Alderman David Moore, and City Clerk Anna M. Valencia all expressed their support to the newly graduated EMTs.
“…if you’re having problems as you move on, you call your alderman and State Rep and tell us about the opportunities that you should be getting,” announced Ald. Moore. “I promise you, that if nobody else will, I will help you knock down those walls.”
All throughout the ceremony, former firefighters imparted wisdom to the inaugural class; politicians boosted the effort echoing their support. The festive occasion doubled as a teaching moment for graduates. Many acknowledged that the city is in need of more firefighters; but more importantly, they emphasized the journey and plight of Chicago’s  Black firefighters.
Ald. Curtis sponsored an ordinance that awarded the Black Fire Brigade a donated fire engine to use for training. Lt. Lewis said he named the fire engine “Engine 21,” in honor of the first Black fire company in Chicago.  Morris Davis provided another historical marker of the event. Davis, a firefighter for 38 years and the founder of the African-American Firefighter Museum, told the story of his most dangerous rescue.
“Believe in yourself and you’re going to make it,” Davis told graduates.
Terri Winston gave the ceremony’s keynote speech before graduates were called up to receive their EMT certificates. For 10 minutes, Winston painted the pictures of how the Black Fire Brigade originated.  She enthusiastically described Lt. Curtis’s ability to “lean on faith,” and her fear when presented with the task of fundraising money for the organization.
Winston shouted, “Now running a magazine? I can do that. But raising money for young people to be trained by us? I don’t know about this Que.”
Well, it turns out their hard work paid off. This Black History Month, Chicago can say it is the only city in the nation to graduate an EMT class from a Black Fire Brigade.