RACE or EQUITY? "A COVID-19 relief fund was only for Black residents. Then came the lawsuits. - The Morning Call"

Getting caught in the heart of the division within communities.  Communities of Race, or Communities built on Equity.

CORONAVIRUS
A COVID-19 relief fund was only for Black residents. Then came the lawsuits.
By JOHN ELIGON
THE NEW YORK TIMES |    JAN 04, 2021 AT 1:07 PM
Black civic leaders in Oregon heard the alarm bells early in the pandemic.
Data and anecdotes around the country suggested that the coronavirus was disproportionately killing Black people. Locally, Black business owners had begun fretting about their livelihoods, as stay-at-home orders and various other measures were put into place. Many did not have valuable houses they could tap for capital, and requests for government assistance had gone nowhere.
After convening several virtual meetings, the civic leaders proposed a bold and novel solution that state lawmakers approved in July. The state would earmark $62 million of its $1.4 billion in federal COVID-19 relief money to provide grants to Black residents, business owners and community organizations enduring pandemic-related hardships.
“It was finally being honest: This is who needs this support right now,” said Lew Frederick, a state senator who is Black.
But now millions of dollars in grants are on hold after one Mexican American and two white business owners sued the state, arguing that the fund for Black residents discriminated against them.
The dispute in Oregon is the latest legal skirmish in the nation’s decades long battle over affirmative action, and comes in a year in which the pandemic has starkly exposed the socioeconomic and health disparities that African Americans face. It has unfolded, too, against the backdrop of the Black Lives Matter movement, with institutions across America — from corporations to city councils — acknowledging systemic racism, and activists demanding that meaningful steps be taken to undo racial inequities. 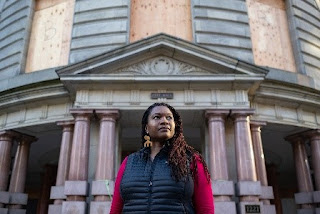