Reprint from 2012.....The Corporate Psychopath

10/2022:  Original URL with FBI does not function.
http://www.fbi.gov/stats-services/publications/law-enforcement-bulletin/november-2012/the-corporate-psychopath 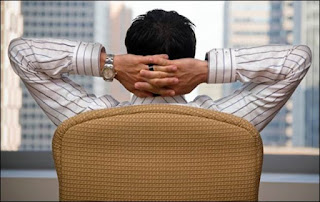 Psychopathy is one of the most studied personality disorders. It consists of variations of 20 well-documented characteristics that form a unique human personality syndrome—the psychopath. Many of these traits are visible to those who interact with the psychopath who possess some or all of these characteristics. For some, superficial charm and grandiose sense of self make them likable on first meeting. Their ability to impress others with entertaining and captivating stories about their lives and accomplishments can result in instant rapport. They often make favorable, long-lasting first impressions. This personality disorder is a continuous variable, not a classification or distinct category, which means that not all corporate psychopaths exhibit the same behaviors.

Beneath the cleverly formed façade—typically created by psychopaths to influence their targets—is a darker side, which people eventually may suspect. They can be pathological liars who con, manipulate, and deceive others for selfish means. Some corporate psychopaths thrive on thrill seeking, bore easily, seek stimulation, and play mind games with a strong desire to win. Unlike professional athletes moved by a desire to improve performance and surpass their personal best, psychopaths are driven by what they perceive as their victims’ vulnerabilities. Little research exists on their inner psychological experiences; however, they seem to get perverted pleasure from hurting and abusing their victims.

Functional magnetic resonance imaging (FMRI) research indicates that psychopaths are incapable of experiencing basic human emotions and feelings of guilt, remorse, or empathy.1 This emotional poverty often is visible in their shallow sentiment. They display emotions only to manipulate individuals around them. They mimic other people’s emotional responses. Some lack realistic long-term goals, although they can describe grandiose plans. The impulsive and irresponsible psychopath lives a parasitic and predatory lifestyle, seeking out and using other people, perhaps, for money, food, shelter, sex, power, and influence.

Psychopathy is a personality disorder traditionally assessed with the Psychopathy Checklist-Revised (PCL-R).2 Often used interchangeably with psychopathy, the term sociopathy is obsolete and was removed from the Diagnostic and Statistical Manual (DSM) in 1968. Currently, there is no formal diagnosis of psychopathy in the DSM-Fourth Edition-Text Revision (DSM-IV-TR); however, it is being considered for the 2013 DSM-V list of personality disorders. 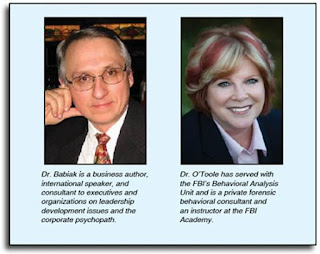 It is fascinating that psychopaths can survive and thrive in a corporate environment. Day-to-day interactions with coworkers, coupled with business policies and procedures, should make unmasking them easy, but this does not always hold true. Large companies’ command-and-control functions ought to make dealing with them simple and direct; however, this may not be the case.

Psychopathic manipulation usually begins by creating a mask, known as psychopathic fiction, in the minds of those targeted. In interpersonal situations, this façade shows the psychopath as the ideal friend, lover, and partner. These individuals excel at sizing up their prey. They appear to fulfill their victims’ psychological needs, much like the grooming behavior of molesters. Although they sometimes appear too good to be true, this persona typically is too grand to resist. They play into people’s basic desire to meet the right person—someone who values them for themselves, wants to have a close relationship, and is different from others who have disappointed them. Belief in the realism of this personality can lead the individual to form a psychopathic bond with the perpetrator on intellectual, emotional, and physical levels. At this point, the target is hooked and now has become a psychopathic victim.

Corporate psychopaths use the ability to hide their true selves in plain sight and display desirable personality traits to the business world. To do this, they maintain multiple masks at length. The façade they establish with coworkers and management is that of the ideal employee and future leader. This can prove effective, particularly in organizations experiencing turmoil and seeking a “knight in shining armor” to fix the company.

How is it possible for psychopaths to fool business-savvy executives and employers? They often use conning skills during interviews to convince their hiring managers that they have the potential for promotion and the knowledge, skills, and abilities to do an outstanding job. Using their lying skills, they may create phony resumes and fictitious work experience to further their claims. They may manipulate others to act as references.

Psychopathic  manipulation usually begins by creating a mask, known as a psychopathic fiction, in the minds of those targeted.

Credentials, such as diplomas, performance awards, and trophies, often are fabricated.

Once inside the organization, corporate psychopaths capitalize on others’ expectations of a commendable employee. Coworkers and managers may misread superficial charm as charisma, a desirable leadership trait. A psychopath’s grandiose talk can resemble self-confidence, while subtle conning and manipulation often suggest influence and persuasion skills. Sometimes psychopaths’ thrill-seeking behavior and impulsivity are mistaken for high energy and enthusiasm, action orientation, and the ability to multitask. To the organization, these individuals’ irresponsibility may give the appearance of a risk-taking and entrepreneurial spirit—highly prized in today’s fast-paced business environment. Lack of realistic goal setting combined with grandiose statements can be misinterpreted as visionary and strategic thinking ability; both are rare and sought after by senior management. An inability to feel emotions may be disguised as the capability to make tough decisions and stay calm in the heat of battle.

Evidence suggests that when participating in teams, corporate psychopaths’ behaviors can wreak havoc. In departments managed by psychopaths, their conduct decreases productivity and morale. These issues can have a severe impact on a company’s business performance.

There also is the risk for economic crimes to be committed. For the corporate executive and the criminal justice professional, the issue is the possibility of fraud. Today’s corporate psychopath may be highly educated—several with Ph.D., M.D., and J.D. degrees have been studied—and capable of circumventing financial controls and successfully passing corporate audits.

Investigators should familiarize themselves with the typical traits and characteristics of psychopaths. They must understand the manipulation techniques used to create and manage the psychopathic bonds established with victim organizations. Their reputations, as judged by those in power with whom they have bonded, known as patrons, often provide added protection from closer investigation. As a result, the investigator may need to build a case with management for the use and broad application of more sophisticated techniques.

Psychopaths can be expert liars often immune to traditional deception-revealing techniques. Some practice avoiding detection in anticipation of being caught and interrogated. Therefore, investigators independently should corroborate any information provided by these individuals.3

Psychopaths often compartmentalize their behavior, enabling them to present themselves differently to various people. This can help them hide their manipulation and control over victims. Coworkers may have knowledge or suspicions about the psychopath’s actions that can be useful to the investigator. However, they either may fear repercussions or fall under the influence of the psychopathic bond. If investigators establish rapport and trust with coworkers, information that will make their work easier may be forthcoming. The difficulty comes when these associates are persons of interest. Fortunately, some companies have hotlines for employees to report coworker fraud and other complaints. This information provides an invaluable source of leads.

Corporate psychopaths with exceptional verbal skills make crafty interviewees. This ability provides an opportunity embraced by many of them to fool law enforcement officers. In these cases, investigators should proceed with caution.4 Specific interview strategies should focus on exposing psychopaths’ vulnerabilities. Possession of a sense of superiority and lack of empathy can enable them to boast about the brilliance of their latest fraud scheme. They often believe that only someone equal in intelligence to them could understand their actions. Strategies specifically designed to elicit such boasting can result in a wealth of information for the investigator.

Corporate psychopaths are successful because they single out and isolate their targets. They sometimes manipulate several victims at the same time. Investigators never should assume they are immune to a psychopath’s approach. One conversation may be enough for the bond to be established. Investigators must know themselves so that psychopaths’ attempts at bonding fail. It is valuable for investigators to allow psychopaths to believe they have established rapport with someone inside law enforcement.

Investigators must work as a team, communicate openly, and take all observations seriously.

This is necessary for personal self-defense, proficient investigative work, and successful prosecution. Officers must take heed to avoid being impressed with a suspect’s credentials and success.

Corporate psychopaths use the ability to hide their true selves in plain sight and display desirable personality traits to the business world.

Occasionally, when psychopathic white-collar offenders are identified, they seek out the media and give interviews. They may believe their skills of persuasion are effective enough to convince the public that they have done nothing wrong and are being targeted unjustly by law enforcement. To prevent serious problems with the investigation and prosecution, investigators must remain prepared for all possibilities.
Conclusion
Psychopathy, one of the most studied personality disorders, can cause numerous problems for investigators. Therefore, law enforcement officers must become familiar with psychopaths’ traits and characteristics, prevent psychopathic bonds from forming, corroborate information, and take all observations seriously. Investigators must know themselves, work together, communicate with one another openly, and be prepared to deal with the corporate psychopath.

Endnotes
1 Functional magnetic resonance imaging (FMRI) registers blood flow to functioning areas of the brain.
2 Hare’s Psychopathy Checklist-Revised (PCL-R) is an assessment tool. Psychopathy, as determined by the PCL-R, is indicated by an overall score of 30 or above out of a possible 40. Many point configurations could result in the overall score, determined by adding up the total points for each of the 20 individually listed traits.
3 Research on psychopathy and lie-detection equipment has yielded conflicting results and remains inconclusive.
4 Once established that a perpetrator truly is a psychopath, reviewing the videotaped interrogation can be a lesson in their subtle, yet sophisticated manipulation techniques. This is the same method used by psychopathy researchers.